When Apple debuted the latest MacBook Pro models, it said that the third-generation butterfly keyboards were simply “quieter.” But in a teardown by repair site iFixit, new keyboard silicone membranes looked suspiciously like a measure to mitigate the possibility of dust, debris and other particles mucking up the butterfly-style key switches.

Since then, an internal Apple document has basically confirmed the true purpose of those silicone key switch covers in the latest MacBook Pro devices.

The document, which is aimed at Apple repair technicians, was obtained by French tech site MacGeneration. The site published a screenshot of the relevant passage, indicating that the silicone covers discovered on 2018 MacBook Pro models are indeed an ingress-proofing measure.

“The keyboard has a membrane under the keycaps to prevent debris from entering the butterfly mechanism,” the document states, adding that changes to the space bar also warrant new repair procedures.

If the document is accurate, then it’s the clearest indication that the silicone membranes aren’t just meant to make MacBook keyboards quieter. 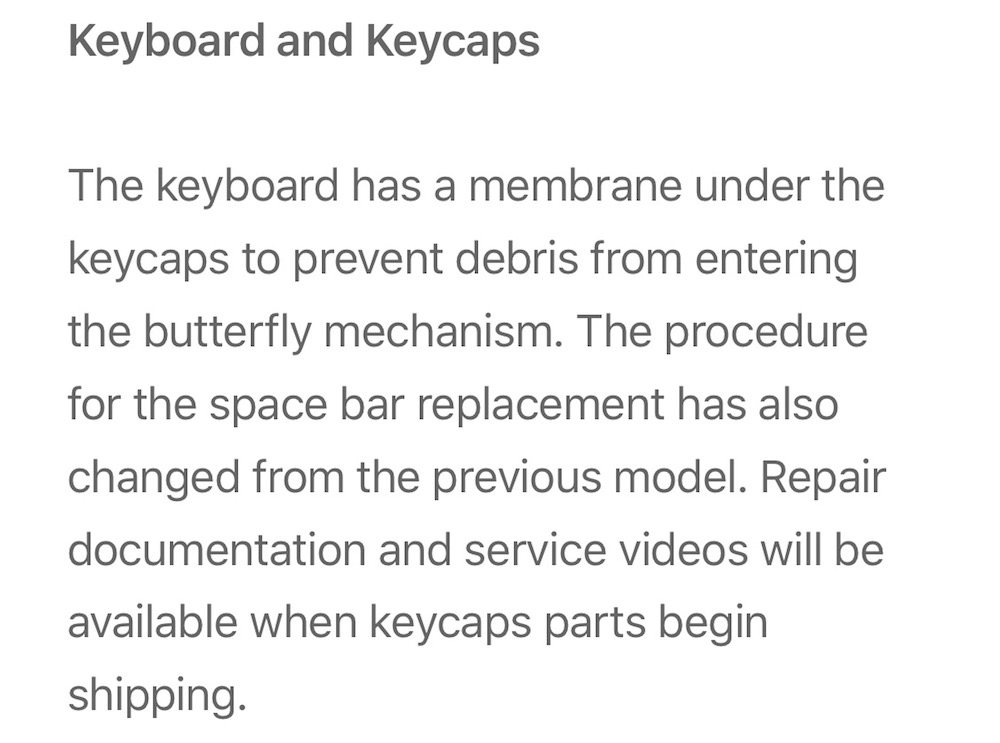 Even before this latest repair document, an Apple patent published earlier this year seemed to corroborate the fact that the silicone membranes were primarily a dust-proofing mechanism — or, at the very least, had another purpose than just making the keyboards quieter.

Of course, we’re not sure how effective the ingress-proofing mechanism will be. We just don’t have enough anecdotal evidence pointing to their efficiency yet. But the silicone membranes are likely a lot better than nothing.

Apple has been hit with a consumer backlash and a class action lawsuit due to the problems some users experience with dust and debris entering their keyboards.

This can result in “sticky” keys and in the worst case scenarios, keys that repeat characters, or don’t function at all.

Based on user and repair expert reports, this is a result of the new butterfly-style design used in recent MacBook and MacBook Pro models to shave off extra weight and size.

The Cupertino tech giant has yet to officially acknowledge that its butterfly keyboards are prone to dust and debris problems. But it has launched a repair program allowing impacted users to get their MacBook and MacBook Pro devices fixed free of charge.