Hopes and expectations were high as a kite in the run-up to Apple’s high-end iPhone X. And while the company managed to sell a considerable number of them at launch and in the few months since its November 2017 release — at once claiming the coveted title of the best-selling smartphone in the world — it appears the thousand-dollar iPhone flagship might be struggling to keep pace.

According to the latest data analyzed by Counterpoint Research via Cult of Mac, iPhone X captured a 2.3 percent share of the global smartphone market in April, 2018 (the latest month for which data is currently available from the firm).

While that value is still impressive, and Apple’s iPhone X is still the company’s best-selling smartphone overall, it’s worth pointing out that Samsung’s latest Galaxy S9+ flagship has seemingly stolen the iPhone’s previous top-slot in Counterpoint’s earlier assessments.

Apple’s iPhone 8 Plus, meanwhile, captured a similar share of the market at 2.3 percent, and the company’s 4.7-inch iPhone 8 came in slightly behind at just 2.2 percent. 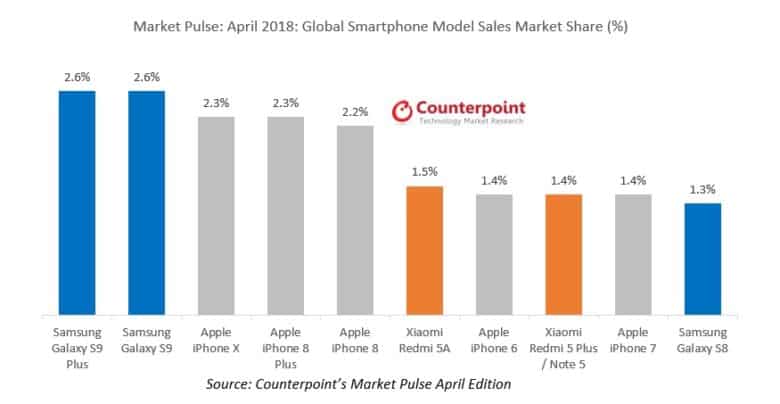 Still, what’s interesting here is that Samsung’s Galaxy S9+ (the top-seller for April) and the standard Galaxy S9 both managed to come in very slightly ahead of Apple’s three 2017 flagships, garnering 2.6 percent of the market each during April and leading the pack.

One final point worth making is that while Samsung may have sold more Galaxy S9/S9+ units in April than Apple sold in iPhone Xs, when it comes to high-end smartphone flagships in general, Apple has repeatedly taken the lead — and continues to outsell the South Korean tech juggernaut pretty much every quarter.

Samsung’s top two performers on the list captured a combined 5.2 percent of the market in April, while last year’s Galaxy S8 added an additional 1.3 percent to the company’s 6.5 percent total. But Apple’s iPhone devices (including several from years ago) collectively captured 9.6 percent.