One of the greatest things about iOS is that when a new software update drops, all compatible iPhone, iPad and iPod touch devices are eligible to download it [generally] right away.. Which is a good thing, since each update improves upon the previous in some significant way(s) — either by introducing new features, patching security vulnerabilities, thwarting new hacking attempts or simply enhancing the overall speed, security and stability of your device.

Apple’s automatic software update feature is intended to keep your device on the cutting-edge of its iOS ecosystem, protected from the latest threats and running the most fluid and secure build available.

But in the eyes of one Indiana-based primary care physician, Apple’s automatic update system is actually a “devious trick” designed to force people (like himself) into upgrading even when they don’t want to.

Dr. Daniel Dwyer, who’s practiced family medicine in the town of Rockville, Indiana, since 1976, was so upset by the fact that Apple kept “harassing” him, constantly trying to get him to update his iPhone to the latest version of iOS, that he decided to go out and sue the company last month after many failed attempts to resolve his complaint with customer service.

“They were harassing me for months, trying to get me to update,” Dwyer told local NBC News affiliate WTHR, adding that “I never did and then ‘boom,’ they just decide to update, and they did it underhanded.”

Dwyer explained that he uses his iPhone 7 for essentially everything related to running his medical practice — whether it’s communicating with his patients, colleagues, pharmacists or simply jotting down a quick note when he needs to. But, given that his daily schedule is so busy, Dwyer explained to WTHR how he has such “little patience for the constant flurry of messages” from Apple, prompting him to update his iPhone to the latest iOS build.

“For a long time, I refused to update because the last time I did it, it was worse than it was prior to the update,” Dwyer explained, adding that “I usually see the [update] message on my phone, and it gives you an option to decline and do it later, and that’s what I choose.”

Dr. Dwyer says he reached his tipping-point a few months ago when, attempting to call a Pharmacy to obtain Rx information on one of his patients, his iPhone blocked the call and instead sent his device straight into installing the update he was so desperately trying to avoid.

“There was no option of ‘agree’ or ‘do it later.’ It just went right to update. They were making me push a button to say I agree to it, otherwise I can’t use my phone [but] I didn’t agree to it in the first place,” Dwyer recalled of the episode. 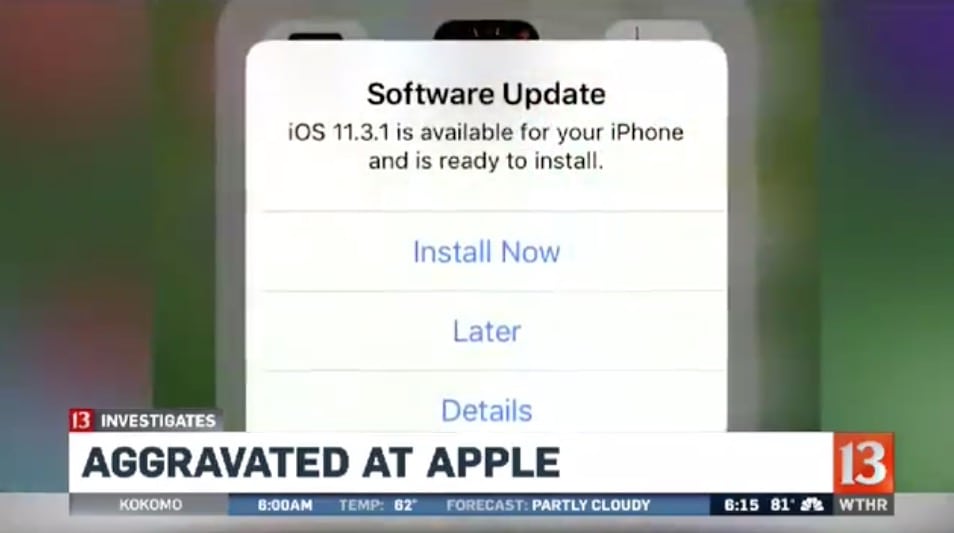 “I couldn’t use my phone until the update finished. It was a devious trick that they did, and it’s not fair. They interrupted my business. Thank goodness it was not a life-threatening situation, but it could have been.”

Dwyer says he tried contacting Apple’s customer service department multiple times, writing to complain about the automatic update system and requesting that his iPhone be reset to the previous version of iOS. But, those attempts were fruitless as customer service agents said there’s nothing they can do.

Nearing his wits-end, Dr. Dwyer says he penned a letter to Apple requesting $200 for his lost productivity, time and frustration — but again the company wouldn’t budge.

And so he sued them for the same amount of money, thinking that perhaps the precedent of a lawsuit — sent straight to the desk of Apple CEO, Tim Cook — would garner a different result.

Ironically, the claim seeks just $200 from Cook and Co., which Dwyer says he’d like made payable to the Parke County Food Pantry. Asked why he’s demanding such a small sum from Apple — one of the world largest corporations worth nearly a trillion dollars — Dwyer explained that it’s not about the money…

“If it happened to me, how many thousands are there this is happening to?” Dwyer asked, adding that the message he hopes to send to Apple is “Don’t be devious. Treat people with respect. Customers should have a choice and a say in this.”