Apple’s iPhone X is the most expensive iPhone to date starting at $999 in the United States, or about 1-2% of the average American household annual income. Despite its hefty price tag, the new iPhones are reportedly selling fast and the high demand is remaining constant. But many have wondered why the price of the iPhone X varies so greatly from country-to-country.

Due to iPhone X’s popularity and its premium price for a pocket-sized device, it’s easy to identify the disparity between markets; however, iPhone X isn’t the first iPhone that fluctuates in price by country; in fact, it’s not even the first Apple product that differs. Because of a variety of reasons Apple and other manufacturers often have different prices in different markets.

That’s right. It isn’t just Apple that has different prices dependent on country or region. Most organizations have different pricing policies depending on where their product is being sold and the variables associated with each location. With Apple being the largest company in the world it’s often singled out. There are a variety of factors that determine the price of internationally-marketed products.

How Large Is the Disparity in iPhone X Pricing?

For the iPhone X the price can vary up to 45% in value (USD equivalent) and even more if you take into account the local relative cost. For example, in India buying an iPhone X costs a person 22% of their annual income. In other words, this would be similar to an American paying $12,600 (USD) for an iPhone. To be fair, this isn’t entirely within Apple’s control. Different countries have very different governments, laws, and economies; however, the USD amount of the iPhone X in India is equivalent to about $1,440.96, or about $440 more than we pay in America.

Why Does the Price Vary So Much?

Pricing in international markets differs for a number of reasons. Some are within an organization’s control, some are due to the local government, laws, and property values, and others are due to fluctuations in the global economy.

Additionally, like it or not, most businesses make it their goal to make money. If customers are willing to pay a high price, companies are likely going to charge it.

Let’s take a closer look at some of the factors that may attribute to the iPhone X’s pricing irregularities.

Each country has its own taxes and tariffs, and even laws that can drive up the price of doing business. For example, India recently raised their already high import tax from 10% to 15% on handsets. Currently, only the iPhone SE is manufactured in India; so, buying an iPhone X is about four times more expensive.

Additionally, property values and rent prices can make it expensive to own or rent warehouses or retail locations. This all must be considered when selling internationally as companies generally strive to maintain the same profit ratio across markets.

In addition to manufacturing a product there are many other costs to consider: Sales, marketing, and maintenance must all be taken into account as part of overhead. Additionally, certain costs, such as shipping, are dynamic and change from location-to-location. This can have a greater impact on foreign sales.

Just because the iPhone may have a higher USD value doesn’t mean it will be out of reach for all buyers. Different local economies play a big part in what customers are willing—or able—to spend. As mentioned earlier, the price of an iPhone X in India is astronomical when you consider it’s 21% of the average earner’s income. Russian customers would spend nearly 3.5x the amount that an American customer would spend when you consider local economic disparities.

However, while an iPhone X is priced at 1,120.68 € (~1320 USD) in Luxembourg , it only makes up 1% of a citizen’s annual income. The same could be said for Singapore and the United Arab Emirates (UAE). Even in the the United States customers spend less than 2% of their annual income (on average) when buying an iPhone X. 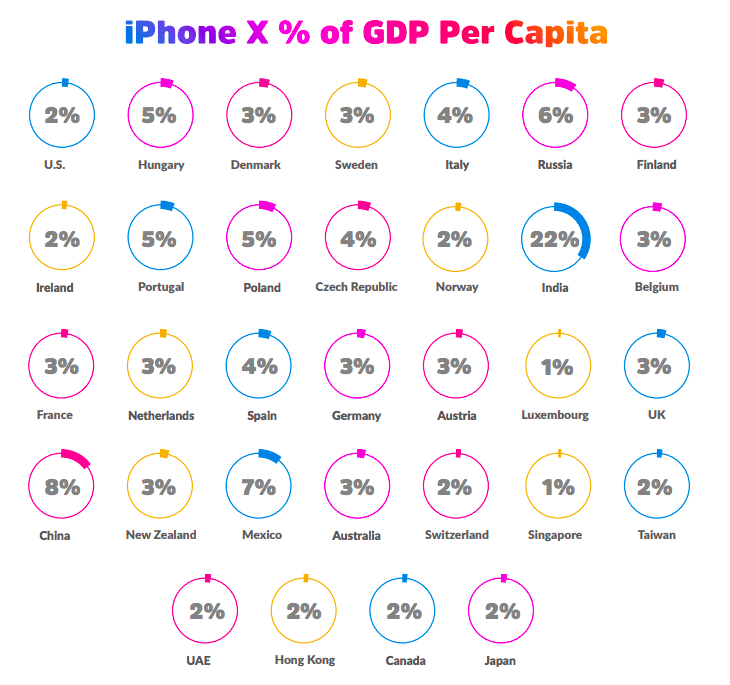 Conversion of international currencies isn’t always as simple as Currency A is 5% more than Currency B. Conversion rates change constantly and some countries have a much less stable local economy than others. When creating pricing policies companies must take into account the volatility of the market to ensure they can stay within their projected profits. This is especially true of public organizations that answer to their investors.

There are a number of factors that can cause price disparities in products, especially those marketed and sold globally. The iPhone X isn’t Apple’s only product that changes price around the world and Apple isn’t the only manufacturer that sells products at different price points across markets. Apple hasn’t officially commented on how it determines its international pricing, but it is likely that local laws and taxes, property costs, import and export taxes and tariffs, shipping costs, volatile markets, population, and remaining overhead costs all play an important part in this determination.

This isn’t to say Apple couldn’t charge less in other countries or to question whether $999 is too much in the US. Simply put, Apple follows similar business practices as seen with its other products and its competitors. Whether or not it sells is up to consumers.

One more thing to consider

While the iPhone X is very expensive—and can be seen as much more expensive in other parts of the world when taking into account GDP (gross domestic product) per capita—it’s important to remember that Apple isn’t known for making low cost products. Apple has long prided itself on making premium products with a higher focus on both quality of design and performance.

With the iPhone, Apple has redefined the mobile industry. And Apple makes iPhones available at multiple price points. While the iPhone X is Apple’s flagship phone, Apple continues to sell phones in various price ranges and screen sizes. In India, the iPhone SE can be found for less than a quarter of the price of the iPhone X from local retailers. The SE starts at just $349 in the United States.

While the iPhone X is an expensive device, buying an iPhone doesn’t need to break the bank. There are many iPhone models that may be right for you at a lower price. In some ways, buying a lower cost phone might even help contribute to Apple and other manufacturers lowering the prices on their future flagship devices.