An iPhone handset has been accredited with saving the life of a woman who was badly injured in this week’s terrorist-related bombing at the Ariana Grande concert in Manchester, United Kingdom, according to a report published by BBC News.

The publication reports that the iPhone device, belonging to concertgoer Lisa Bridgett, allegedly “diverted and slowed” a nut which had penetrated her cheek. Prior to penetrating her cheek, however, the nut — a fragment from the explosive devices placed inside the Manchester arena — first passed through the iPhone that Bridgett was speaking on at the time of the blast. 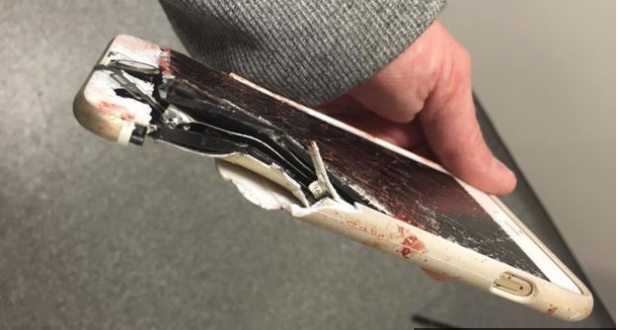 “Lisa Bridgett, of Pwllheli, had been using the phone after the Ariana Grande concert on Monday when the explosion caused a steel nut to hit her,” the report alleges, while adding that “She lost a middle finger before the nut went through her phone and her cheek, ending up lodged in her nose.”

Bridgett’s husband, Steve Bridgett, believes that his wife’s iPhone may have diverted and slowed down the nut, causing it to get lodged in her nose rather than continuing on its trajectory and potentially causing even further damage to her cranial cavity, or even death.

Bridgett and her daughter, along with her daughter’s friend, attended the Ariana Grande concert on Monday night at the Manchester arena, where a suicide blast carried out by Salman Abedi and his accomplices resulted in the death of 22 innocent civilians, and injured as many as 64 others — some critically.

Bridgett, who underwent surgeries on Tuesday and Thursday of this week to repair damages caused by the blast, reported being in “a positive mood” and feeling “very lucky to be alive,” according to a statement issued by her husband.

Mrs. Bridgett’s case represents a truly unique instance in which an iPhone was able to provide its owner with unplanned protection from potentially fatal damages. While we’re constantly hearing tales about exploding iPhones and even iPhone spontaneously melting into geothermal goo, it’s seldom if ever that we have come across a story like Lisa Bridgett’s — about an iPhone actually preventing harm to its owner.

Of course, there was that one time some inquisitive YouTuber’s decided to see how many iPhones it would take to stop the force of an AK-47’s bullet (hint: it’s more than one), but besides that, we really don’t have anything like Lisa Bridgett’s situation to draw comparisons between. If indeed her iPhone device was able to “slow and divert” the flying shrapnel, as her husband has adamantly suggested, then Bridgett is truly a lucky survivor who, while in the wrong place at the wrong time, was unknowingly grasping a shield in the palm of her hand.