As they do best, the hands over at AnTuTu have compiled their annual report of the top 10 best performing smartphones of the year. And, as we’ve seen the company pull off for the last several years, Apple’s current flagships — the iPhone 7 Plus and standard iPhone 7 — have secured their fate in the top two slots on 2016’s chart.

Clocking in with impressive yet dizzying scores of 181,316 and 172, 001, respectively, Apple’s iPhone 7 Plus and iPhone 7 flagships are no doubt among the most powerful handsets that 2016 had to offer, with Apple’s all-new A10 Fusion SoC being the true star of the show — at least so far as AnTuTu’s speed performance testing is pertinent. As the 7th installment in Apple’s A-series line of mobile processors, the A10 Fusion — with its quad-core, 2.34 GHz clock-speed — is Apple’s best performing, highest-clocked CPU to power any iOS device to date.

Perhaps unsurprisingly, the remainder of AnTuTu’s list is made up entirely of higher-end and international variants of some Android-powered handsets — with the OnePlus 3T, in particular, shining brightest of them all with its 3rd slot position on the list. Other winners include Le Eco’s Le Pro3, Motorola’s Moto Z, Xiaomi’s Mi 5s, ASUS’ Zenfone3, and finally, ZTE’s AXON 7 to round out the top 10. See all the winners and their scores for yourself below — the higher the score, the better the performance. 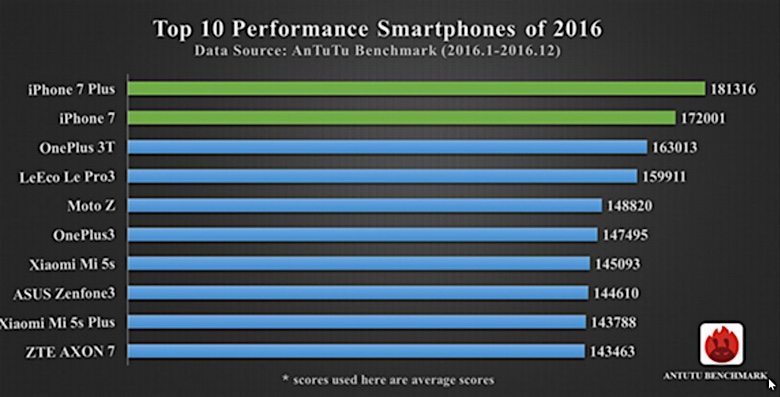 Noticeably absent from the list, as you can tell, are any offerings from Samsung, the South Korean tech-titan that typically produces several high-end phones each year — such as the Galaxy S7 and Galaxy Note 7, for 2016. While the Galaxy Note 7 is more than likely absent from AnTuTu’s list for obvious reasons, it’s also worth considering the simple fact that not all chipsets are created equally. In other words, while Qualcomm’s otherwise beastly and energy-efficient new Snapdragon 821 CPU, which powers the OnePlus 3T,  clocked at similar speeds, it doesn’t even come close to being able to dance with Apple’s A10 CPU.

It’s interesting to think about how a smartphone boasting such premium silicon — arguably the heart and soul of our mobile devices — can differ from others, powered by such mathematically similar processors, so variably. However, Apple has been able — in its usual, purely magical fashion — to upend the mobile CPU industry, having created its own, proprietary, more powerful, energy-efficient, and all-around better constructed chips. Chips that, year-after-year, wow iPhone users with their stellar, buttery smooth performance.

Are you using one of 2016’s best performing smartphones? Let us know in the comments!