Samsung over the weekend unveiled its next-generation Galaxy S9 and S9+, which represent the South Korean tech titanâ€™s 2018 flagship offerings and boast a myriad of cutting-edge features and innovations.

But while they may be the companyâ€™s latest, greatest, and most powerful smartphones on offer, a new slate of benchmark scores published this week reveal theyâ€™re not quite as powerful as their closest competition.

Samsungâ€™s Galaxy S9 duo is powered by either the Qualcomm Snapdragon 845 SoC (U.S.A. & China) or Samsungâ€™s proprietary Exynos 9810 Octa (Europe & Middle East).Â And though the Galaxy S9/S9+ duo is powerful in its own right, it turns out those devices are simply no match against Appleâ€™s latest iPhone 8, iPhone X, and even the company’s iPhone 7 and 7 Plus from 2016 â€” all of whichÂ handily put the S9 duo to shame.

Both Appleâ€™s iPhone 8 and iPhone X are powered by Cupertinoâ€™s latest A11 Bionic CPU, while the iPhone 7 and 7 Plus are powered by the almost two-year-old A10 Fusion.

Meanwhile, Samsung decided to â€œgo both waysâ€ with its Galaxy S9 and S9+ â€” putting a Snapdragon 845 in some units, and an Exynos 9810 Octa in others â€” which interestingly appears to have resulted in notable performance disparities between them, as well.

According to Anandtechâ€™s independent testing (which surveyed performance scores using Geekbench 4), Appleâ€™s A11 and A10 earned single-core performance scores of 4,630 and 4,007, respectively. In comparison, Samsungâ€™s proprietary Exynos 9810 Octa earned just 3,734. 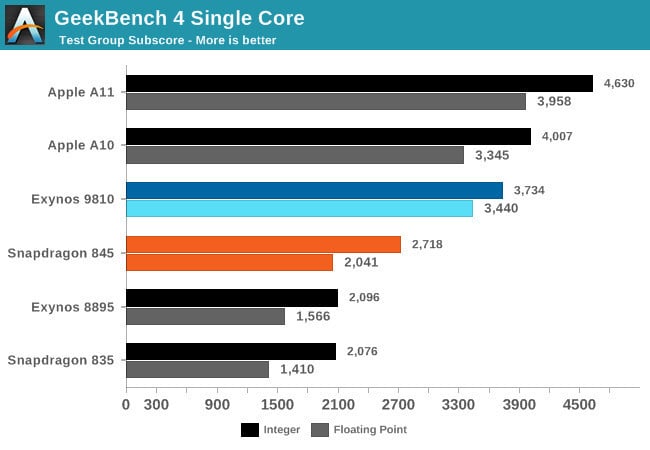 Even more pitiful was the 2,718 single-core performance score garnered by Qualcommâ€™s â€œcutting-edgeâ€ Snapdragon 845. Meanwhile, Samsung’s previous-generation Exynos 8895 and the equally-old Snapdragon 835 were seen trailing in the distance.

Breaking Down the Numbers

Anandtechâ€™s testing culminated in both Integer and FloatingÂ Point scores for single-core performance.

Such tasks, for instance, include graphic rendering, content creation, and pushing high-performance applications.

Notably, the only area where Samsungâ€™s Exynos 9810 appears to have (slightly) pulled ahead, is when comparing it against Cupertinoâ€™s previous-generation A10 Fusion in Floating Point performance. There, the Exynos 9810 scoredÂ 3,440, in comparison to the A10â€™s 3,345.

In all other tests, however, the verdict is clear: Appleâ€™s A-series silicon continues to run full circles around its closest competition in the mobile chipset space.