Originally debuted as a hallmark feature of Apple’s iPhone 6s and 6s Plus, 3D Touch was right out of the gate, an extremely intuitive, albeit undeniably limited means of interacting with Apple’s 2015 flagships.

And while we expected 3D Touch functionality to advance to at least some extent in iOS 10, we’re now beginning to get a clearer glimpse of what exactly 3D Touch will bring to the table this fall.

Apple’s Senior Vice President of Software Engineering, Craig Federighi, showcased a plethora of new developments in 3D Touch functionality at the Cupertino-company’s annual Worldwide Developers Conference (WWDC) Monday morning. And from what we can see so far, the touch-based, pressure-sensitive layer of control — and all its peek and pop glory — appears to have become a legitimate form of deeper interaction, thanks in part to Apple’s advanced new widget system in iOS 10. 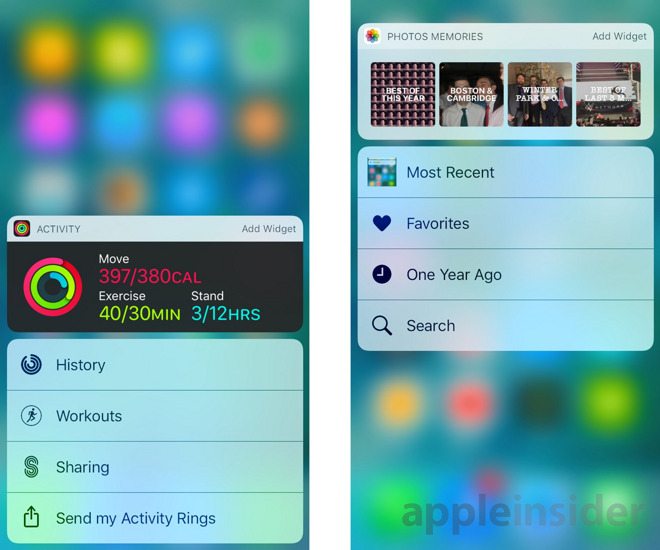 For example, in iOS 10, when an icon is hard-pressed, you’ll now be presented with a short-list of the most commonly used functions associated with that particular app. Most apps now feature their own widgets, too — allowing users to preview the most important bits of information pertinent to that app.

For instance, if you perform a deep-press on the Calendar or Weather app icons in iOS 10, you’ll then be presented with a list of upcoming scheduled events and today’s forecast, respectively.

Another example would be when you deep-press the Music app icon in iOS 10, at which point a photo of the current album’s artwork, in addition to basic audio controls will appear.

What’s more, iOS 10 will allow you to add certain widgets to a dedicated home screen — which can be accessed from the standard home screen by performing a quick swipe to the left. This will allow your most commonly used apps to be accessed without even having to open them, as we normally would on current and previous versions of iOS — and therefore, the process of being presented with our most important, sought after information becomes significantly expedited.

What do you think of Apple’s new widget system and 3D Touch features coming to iOS this fall? Let us know in the comments!