In what seems to be a crazy move, Amazon will stop selling Apple TV on their website, including 3rd party sales. This comes as Amazon claims that their online video streaming service does not work on Apple TV and Google Chromecast. The last day to buy these devices on Amazon will be October 28th. Both Apple and Google fans will have to shop elsewhere.

Spencer Soper from Bloomberg Buisness reports that Amazon sent e-mails to marketplace sellers that they will stop selling Apple and Google devices because they don’t “interact well” with Amazon Prime Video. No new listings will be allowed, meaning 3rd party sellers will have to find another site to sell their Apple and Google streaming devices.

Amazon’s reasoning seems a little clumsy, and it might be more that Amazon doesn’t want to compete with Apple or Google. Amazon has their own streaming devices, most notably the Amazon Fire TV Stick, which is in direct competition with other streaming devices. While the TV Stick is cheaper than Apple TV, it also does not have access to iTunes nor can you stream Mac software to it. Apple customers are more likely to buy the Apple TV anyway, but Android users will have a tougher time.

Google products will be able to use Android apps on Chromecast, eventually, and now they have one less easy way to buy Chromecast. Bloomberg Business points out that Apple customers probably won’t care about Amazon’s new policy. After all, they have plenty of places to the new Apple TV, like the Apple store or large stores like Target. However, Google Chromecast is much harder to get. There will still be options on Amazon’s site other than the Fire TV, like the Roku 3, but the limit in choice may not go over well with Amazon customers.

Soper from Bloomberg interviewed a man named Allen Grunes, a lawyer for Konkurrenz Group in Washington who said that, “Amazon probably wants to teach Apple and Google a lesson about not making their devices more compatible.”

Michael Pachter, an analyst at Wedbush Securities in Los Angeles said that Amazon’s move to limit streaming device selection will send the wrong signal to their customers and that Amazon’s reasoning is “especially weak.” Pacher says that, “Fewer than 20 percent of Amazon customers are Prime members.” 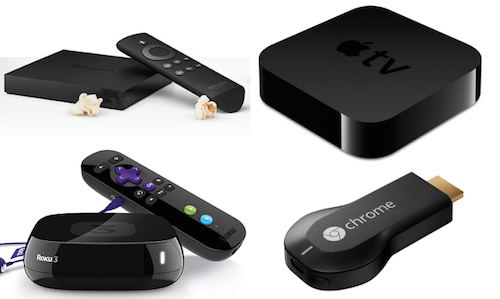 Amazon’s decision to stop selling Apple TV and Google Chromecast is a surprising development. It’s likely driven from the desire to encourage more people to sign up for the Amazon Prime service, or perhaps it’s more out of spite that Prime Video does not work on those devices.

Even so, it’s odd that a company would compromise potential profits from selling Apple and Google devices. Holding out, just in hopes of more subscriptions, seems unwise.