Apple’s $4,999 iMac Pro has already established itself as the company’s most powerful, advanced, and capable desktop computer. And while it technically won’t be available to order until early Thursday, December 14, some of the web’s most prominent reviewers have already been given hands on time with it, revealing that Apple’s five thousand-dollar iMac Pro is not only the company’s most powerful computer, but also its safest and most secure — thanks to the inclusion of a dedicated T2 chip.

According to iOS and Mac developer, Cabel Sasser, who was among the first tech experts to receive and review Apple’s new iMac Pro, the machine comes equipped with a next-generation T2 chip. It’s described as a next generation “security enclave” for iMac Pro, used to store encrypted passwords on the all-in-one desktop — and effectively acting as the machine’s personal “hardware encryption engine.”

“This new chip means storage encryption keys pass from the secure enclave to the hardware encryption engine in-chip — your key never leaves the chip,” Sasser explained in a Tweet. “And, it allows for hardware verification of OS, kernel, boot loader, firmware, etc.”

Apple began using these secure enclave chips back in 2013, when they were first featured in the company’s iPhone 5s. The T2 chip being used in Apple’s iMac Pro, however, is a “much more advanced” iteration of the original chips — and rightly so, being the first to appear in [an incredibly expensive] flagship Mac desktop.

Joining the iMac Pro are Apple’s latest MacBook Pro models featuring the OLED Touch Bar, which inherently boast Apple’s T1 chip to help facilitate Touch ID authentication. It’s unknown how the T2 chip, being second-generation, is more advanced than the T1 — however iMac Pro, unlike MacBook Pro, does not feature Touch ID technology. So we’ll really just have to wait and see what functional advantages the T2 chip has to offer iMac Pro users.

As Casser noted, Apple’s combined hardware/utility solution provides iMac Pro users with a seamless yet sophisticated array of security settings, allowing for the “hardware verification of OS kernel, boot loader, firmware and more,” while the advanced security features can be tweaked, enabled or disabled at any time. 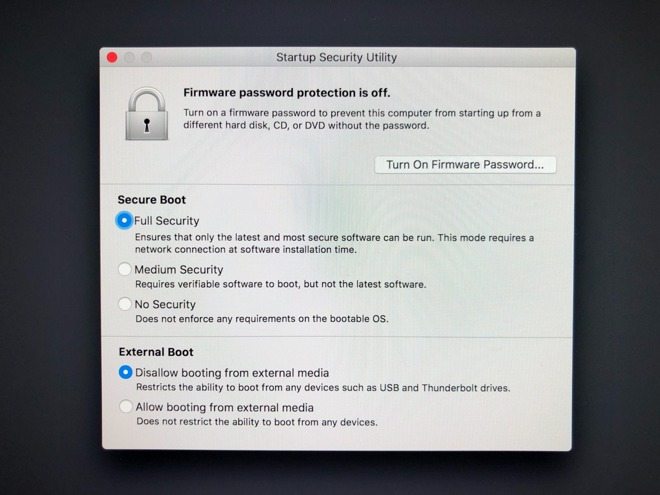 Another benefit, according to Apple Insider, is that “users can turn on a firmware password to prevent a computer from starting up from a different hard disk, CD or DVD without the password.”

In addition to its list of advanced components and technologies, Apple’s iMac Pro was originally rumored to ship with an A10 Fusion SoC co-processor to help facilitate Apple’s always on ‘Hey Siri’ functionality on the high-end desktop — however it’s yet to be confirmed whether the A10 SoC is in fact on board.

Otherwise, early reviews of the Space Gray-tinged iMac Pro have for the most part been glowing — as the machine is expected to go up for sale within a matter of hours.