The PC vs. Mac rivalry has existed for decades. Microsoft and Apple were at odds for much of the past, however, recently Microsoft has had a change of heart.

The company reps were even at the last Apple event which unveiled the iPhone 6s, showing no bad blood. There was an air of amicability. Since it’s the holiday season, perhaps Microsoft wanted to take that a step further with a new commercial.

While viewers might think the ad was spontaneous, it was planned with Apple’s permission. Microsoft used real employees, auditioning hundreds and only choosing 37 of their best singers. Apple employees and The Harlem Youth Choir joined in on the singing. The commercial was filmed on November 16th, only a few weeks after the Microsoft store was opened. “It was a fitting welcome to the neighborhood by Apple and a warm celebration to begin the holiday season,” from a Microsoft spokesman. “The song’s message of hope and empowerment resonated strongly with the participants and crowd alike during this particularly emotional time of year.”

In the early 80s, Apple and Microsoft had a close relationship. Steve Jobs and Bill Gates were so close at one point that they double dated occasionally, according to an article published by the Guardian. Apple needed software for an upcoming platform and Microsoft helped develop it. Unfortunately, it wasn’t long before the two parted ways. Steve wanted Microsoft to develop apps for the Mac, while Bill wanted Microsoft to be a larger influence. He didn’t want to feel dependent on Apple. 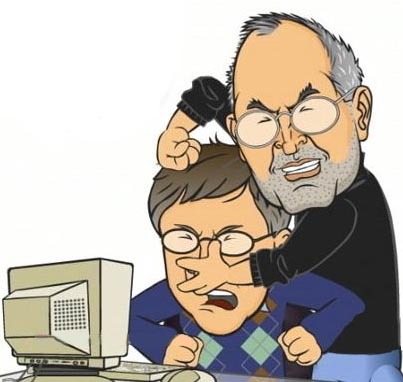 It’s been said that Microsoft had engineers working on copying the Macintosh OS while working on their own version called Graphical OS: Windows. Steve Jobs discovered this and not surprisingly felt hurt. After that, there was a long period of time where both companies engaged in an odd relationship with Microsoft both trying to snag market share from Apple while also helping the company. This strain was very public. Both CEOs tried to bury the hatchet in 1997, when they made what was called The Microsoft Deal. This seemed short lived after 2003, when the famous Apple and PC commercials came out with John Hodgeman and Justin Long. Steve was thought to still be bitter about the old days, even though Apple had become a successful company, especially in the mobile market.

When Steve Jobs passed, Bill gave a heart-felt statement that included this: “I’m truly saddened to learn of Steve Jobs’ death. Melinda and I extend our sincere condolences to his family and friends, and to everyone Steve has touched through his work.” It’s amazing how the drama unfolded between Apple and Microsoft, yet now that seems to have changed. It’s a pleasant thing to see and hopefully it will continue well after the holidays.