Huawei isn’t doing well in the U.S. But, in the wake of recent events, the Chinese firm is doubling down on its efforts in other markets — such as the UK. And, apparently, those efforts include trolling the company’s primary rivals, Samsung and Apple, in the country.

The Chinese OEM is preparing for the launch of its next flagship lineup, the P20 and P20 Pro, which it will unveil at an announcement event in Paris next week. But ahead of that unveiling, the firm has taken to some fairly cocky stunts in the UK.

Huawei has reportedly deployed a fleet of flatbed trucks sporting billboards advertising the new device across the UK’s big cities, according to The Inquirer. And it’s apparently driving those trucks around Apple Store and Samsung Experience Store locations.

The mobile billboards are decorated with sly marketing copy like “wait” and “be patient.” Parked outside of an Apple or Samsung Store, the message seems pretty obvious.

That’s not the end of Huawei’s guerrilla marketing tactics, however. The Chinese OEM has also taken to spray-painting graffiti advertising its newest flagship “antagonistically” close to Apple and Samsung retail locations. That graffiti boasts that “the Renaissance is coming” and will wash away after rainfall. 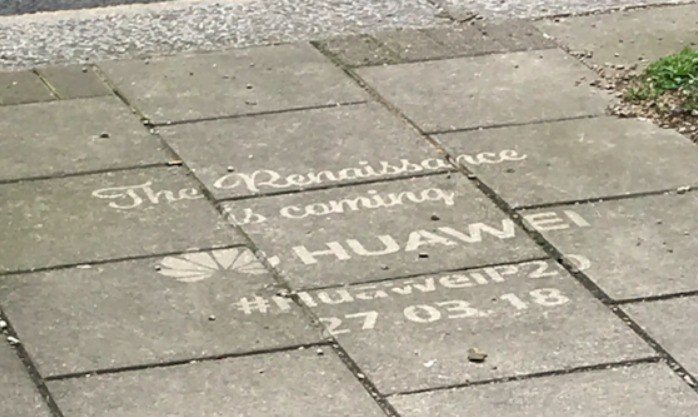 In other words, Huawei is really confident that its newest smartphone series is going to blow minds. To be fair, the P20 is supposed to pack a suite of camera features powered by artificial intelligence and the P20 Pro is rumored to sport a triple-Leica-lens camera setup. Whether the lineup propels Huawei to the forefront of the smartphone industry remains to be seen.

The Chinese tech giant is the third smartphone largest manufacturer in the world, and its devices are incredibly popular in its home country. Despite that, Huawei is far from a household name in the U.S. and the firm has struggled to gain a foothold in the country — largely due to government pressure amidst allegations that the company’s devices could be used as spying tools for the Chinese government.

Earlier this year, a carrier partnership with AT&T fell through. And just this week, Best Buy confirmed that it would stop selling Huawei devices in its stores in the coming weeks.