We all remember that historic moment when Steve Jobs walked up on the stage and unveiled the first ever iPod. It’s not a stretch to say that the iPod was the thing that put Apple on the fast track to success which is what makes it even more curious as to why we’ve not see any more big iPod releases by Apple.

Much like many of you reading this, the iPod for me has feelings of nostalgia and good memories attached to it, but just like every other piece of technology, it was inevitably going to become obsolete one day. Apple announced on July 27 that the iPod Shuffle and iPod Nano were discontinued for good, which leaves the iPod touch as the only member of the iPod family that began with the iPod Classic.

The iPod touch itself hasn’t received any updates since the 6th generation, making it exceptionally out powered by the newer iPhones. And looking at the current state of things it’s safe to assume that we won’t be seeing a new release of the iPod anytime soon, if at all.

Seeing what was once Apple’s biggest product reduced to a mere image of its former glory does make us sad, but looking at it from a business perspective it does make sense for Apple to move on. As you can tell from the chart provided, by 2015 the iPod only accounted for 1% of Apple’s total revenue which would make investing any more resources in it not the smartest move for Apple. 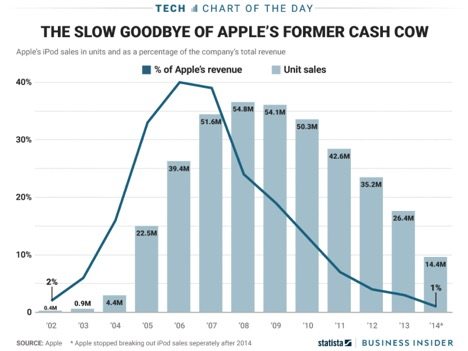 Since the launch of the iPhone the need to have a separate music player like the iPod has only decreased, because the iPhone serves as an phone, music player, and so much more. The major reason why one would even consider purchasing an iPod over an iPhone would be the lower price margin, which is something Apple isn’t so keen about.

Will We Ever See a New iPod?

With Apple iPhone sales being higher than ever before, and the need of a separate music player lessening with each new release, the chances of a new version of the iPod touch coming out anytime soon are low. Considering Apple has stopped producing all other iPod versions it’s safe to assume that the Apple iPod touch will be receiving the same treatment soon. But it is also unlikely that Apple will terminate the iPod touch without another big release. Apple hasn’t made a clear statement of whether we’ll be getting a new iPod but with the 20th anniversary of the iPod drawing near us, one more release might just be possible. We’ll keep you updated with any new iPod rumors or news so be sure to check back.