The retail space on the corner of Stockton & Ellis used to be Apple’s domain in downtown San Francisco. But those doors (which opened back in 2004) are now closed, and Apple has made its way to a bigger and better location. Last week, the company decided to open their new Apple store directly in the heart of the tourist-laden, business-heavy Union Square section of downtown. And it sure is impressive.

Sidling up alongside the likes of Nike and the Grand Hyatt hotel, the new Apple store is the perfect combination of flawless design and green spaces. Designed by firm Foster + Partners, the store boasts 42-foot sliding glass doors, a vast canopy of trees, a green wall, and plenty of open space. Plus the iconic glass staircase that has been a staple of Apple stores throughout the world.

The new space brings some new ideas and spaces to the table: the avenue (a new accessory display case), the forum (a learning space), and the boardroom (a discreet meeting space for companies and entrepreneurs). They also plan on implementing a new version of the Genius Bar, which will now be dubbed the “Genius Grove”. This new rendition eschews the traditional long desk setting and instead opts for tranquil trees and roaming technicians. 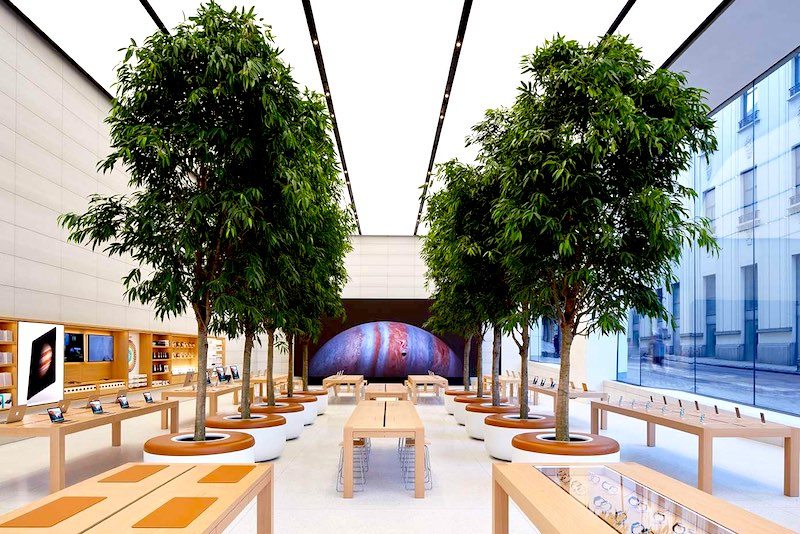 With the store’s layout, Apple is hoping to foster an atmosphere of collaboration and community, transforming the store into more than just a retail space. As Apple employee Chris Riess noted to the SF Gate, “It embraces our core values better than any building that we ever made.”

Vice President of store design, Angela Ahrendts, was on hand for today’s opening, along with a number of employees and eager customers (after all, the first 1,600 customers received a free t-shirt and photographs from Travis Jensen). Apple’s own Jony Ive even paid the store a visit on opening day. The chief design officer was on hand to bring in the new store alongside the new Genius Grove on the second floor of the store.

This store will be a model for those to come, incorporating green spaces with a quiet atmosphere and plenty of glass. As senior executive partner of Foster + Partners, Stefan Behling, hinted to design and architecture website Wallpaper, “This is just a teaser.”

What do you like most about the new Apple Store? Let us know in the comments below.