Wouldn’t it be cool to go behind the Scenes at Apple Music and see what’s really going down? Apple Music’s Snapchat account (username ‘applemusic’) went live yesterday as the account’s first Snapchat story was posted. The story features a behind the scenes look at Beats 1 Radio from the studios in LA, London, and New York. 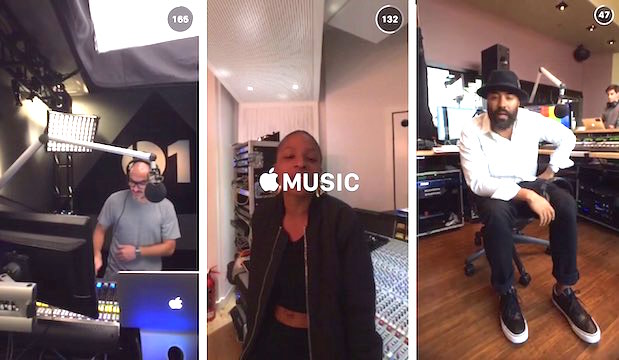 The 195-second story begins in LA, taking the viewer through several scenery shots and into the LA Beats 1 studio with DJ Zane Lowe. The story offers a quick behind-the-scenes look at Lowe broadcasting his show worldwide before transitioning to London, again with some scenery shots and into the London studio with DJ Julie Adenuga. After watching Adenuga host her show, the story again transitions to New York City with Ebro Darden.

The story provides a short, but interesting look at how the studios and Djs behind the Beats 1 Radio program work. Snapchat’s 10-second clip limit seems to work well for such behind-the-scenes footage, and will likely appeal to the younger demographic that the social media service is popular with.

Beats 1 Radio, a 24-hour curated radio station that broadcasts live from cities around the globe, was launched alongside the Apple Music service on June 30 of this year. Many consider Beats 1 to be Apple Music’s most exciting and important feature, and Apple is looking to promote the station extensively. The company is uncharacteristically promoting the service on social media services such as Facebook, Twitter, Tumblr, and now Snapchat.

To keep updated on Apple Music’s Snapchat stories, add â€œapplemusicâ€ using the â€œAdd by Usernameâ€ feature in the Snapchat app. If you’d prefer to just see their inaugural story, you can check out the entire video below, brought to you by The Next Web.