With Apple’s introduction of its dual-lens camera system on its iPhone 7 Plus, the company not only set the stage for a range of powerful features like Portrait Mode (aka, the Bokeh Effect) and the even newer Portrait Lighting — but as the company continues to refine and enhance its camera hardware (and software) year after year, it’s only reasonable to expect even more new innovations in camera capabilities to come.

As explained by Patently Apple, an example of how one would go about filming from “two different perspectives simultaneously” using an iPhone’s dual lens camera is best illustrated in Apple’s patent FIG. 7, presented below:

“Attention is now directed to embodiments featuring dual, simultaneously displayed digital viewfinders for creating videos,” Apple explains, noting that the cameras (#702-A and #702-B) are able to record data from two separate “split views” (#708-A and #708-B) which are referred to as wide-angle camera view and high-magnification (zoomed) view. 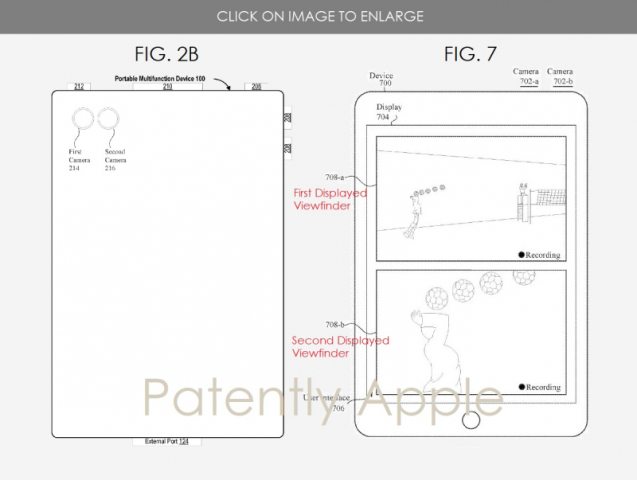 “The user interface allows a user to manage the compositions of digital viewfinders 708-A and 708-B independently, such as by zooming and panning viewfinder content separately,” Patently Apple explains.

“The user interface also allows a user to initiate simultaneous recording (e.g., storing) of visual information from both cameras.”

For example, Apple’s patent FIG. 7 illustrates an iPhone (#700) which is simultaneously recording a volleyball match from two distinct vantage points. In the first view (#708-A) we see the seemingly distant, court-side view of a player serving the ball through the wide-angle viewfinder, while in the second view (#708-B) we see an enlarged view of the volleyball player, up-close and personal through the higher-magnification (zoomed) viewfinder.

In some embodiments of the invention, it appears that users would be able to control the frame-rate captured through each viewfinder on an as desired basis. For instance, using the software-based camera controls on-screen, the wide-angle view could theoretically capture video at 24 frames per second (fps), while the video filmed through the high-magnification (zoomed) view could theoretically be captured at 48 fps (or vice versa).

Apple’s patent literature explains that users may be able to control other “visual characteristics” of the recorded film, such as the resolution captured through each viewfinder.

The inherent patent application was filed by Apple back in January of 2018, and considering it’s just a patent, there’s no telling when or if a camera feature like this will be available for eligible iPhone models to take advantage of.