Prior to his passing in early October of 2011, one of Steve Jobs’ final projects as CEO of Apple was designing and overseeing the design and preliminary development of its forthcoming new ‘Campus 2’ headquarters — aka ‘The Spaceship’ of Silicon Valley.

Sitting at the epicenter of a sprawling, 176 acre parcel of land on Pruneridge Avenue in Cupertino, California, Apple’s 2.8 million square foot compound was designed and crafted with such attention to detail, that the company often found itself at odds with the myriad of contractors, architects, and workers who are, or were at one point, integral to the project’s successful completion, according to a new report published this week by Reuters.

As a matter of fact, Apple’s penchant for perfection, down to even the most minimalist of details, is so evident in the structure, itself, that some have even quipped how various aspects of the building are even more intricate than the company’s mobile devices. And while one could certainly argue that a 2.8 million square foot structure can’t really be compared with a device that fits comfortably in the palm of one’s hand, new revelations from the front-lines are sure to shed some light on just how faultless Apple expected the finished product to be — and just how immaculate it actually will be, once the complex opens up to the anticipated 14,200 employees that will call it their primary work environment come the spring of 2017, according to the report. 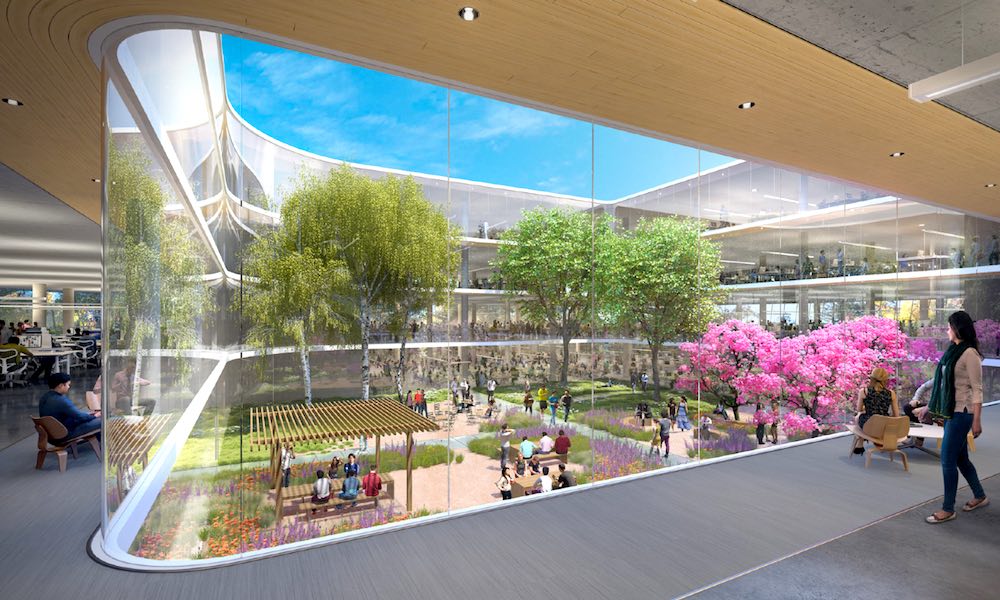 And yet it’s this very appetite for perfection that has also led to unprecedented delays in the structure being completed on time. Jobs’ initial timeline, laid out in June of 2011 before the Cupertino City Council, predicted that the main building would be ready to inhabit by 2015 at the latest. However, the main structure, itself, which resembles a massive ring encapsulated by “the largest piece of curved glass in the world,” is a unique take on the traditional office, in that it will offer up a complex, truly open environment for the creative minds at Apple to work amidst the backdrop of a lushly landscaped, architectural testament to design.

“It’s not about maximizing the productivity of the office space, it’s about creating a symbolic center for this global company,” said Louise Mozingo, professor and chair of the Department of Landscape Architecture and Environmental Planning at U.C. Berkeley. “They are creating an icon.”

In the same way that Apple pays exquisite attention to detail when designing its various mobile devices, so too was the company with essentially every aspect of design and construction of the sprawling complex, according to many of the current and former project managers of Campus 2, who spoke to Reuters on condition of anonymity due to existing non-disclosure agreements. Even petty details, such as the types of woods used throughout the main building, were subject to pages upon pages of rigorous guidelines that were set forth by Apple’s in-house construction team.

And while Apple’s sharp and sophisticated design language certainly stands to benefit the project from an aesthetic vantage point, the company’s oftentimes “unrealistic expectations” were just as often at odds with the realities of the physical world.

“With phones, you can build to very, very minute tolerances,” said one former architect who left the project after the design phase was signed off on. “You would never design to that level of tolerance on a building. Your doors would jam.”

“You would never design to that level of tolerance on a building. Your doors would jam.”

Interestingly, the project’s original contractors, Skanska USA and DPR Construction, abruptly left it high and dry shortly after construction began; and to this day, neither Apple, nor either of those entities, have commented on the reasons behind said departure, which several construction experts have called “a rare development for a project of that scale.”

“The things you can’t see, they all mattered to Apple,” one former construction manager said, noting the company’s almost fanatical attention to detail on such simple aspects of design, including Cupertino’s desire for an “immaculately polished concrete ceiling,” and elevator buttons, for example, that largely resemble iPhone home buttons.

Even requests like the building’s internal doorways, which Apple wanted to be “perfectly flat with no threshold” were met with strong pushback from the original construction team, despite Apple’s firm stance on the matter.

“We spent months trying not to do that because that’s time, money and stuff that’s never been done before,” the former construction manager said, adding that his team would often try to work with the company to finalize certain “minute features,” which in turn created a sort of domino effect that ultimately set the team back substantially on other vital parts of the project.

It’s indeed interesting to think how some of the same design elements that have been applied to our favorite Apple products, have also been applied to the development of the company’s forthcoming home base, which many analysts have predicted could ultimately cost the company as much as $5 billion after all is said and done. Could Apple’s impeccable ‘Campus 2’ be an ominous sign that even bigger and better things are coming from Apple? Only will tell, of course. But with a global headquarters as sprawling and complex as ‘Campus 2’ — one legitimately resembling a Spaceship in the raw — we’d be hard pressed to believe otherwise.