In a major breakthrough, scientists in China announced yesterday that they have successfully teleported a photon, or light particle, from the ground to a satellite in orbit more than 310 miles above. This marks the first time an object has ever been teleported from Earth into space and confirms that “quantum entanglement”– one of the most bizarre and mysterious feats in quantum theory– is possible.

Entanglement occurs when two quantum objects, such as photons, come into existence at the exact same time and place, giving them a shared (or entangled) existence and identity. This curious phenomenon means that measurement on one photon influences the other photon in the same way, even when the two objects are in separate galaxies. Whatever happens to the first photon happens to the second one, and when the second photon assumes the identity of the first, teleportation has essentially occurred. It’s what Einstein once called “spooky action at a distance”, and theoretically, there is no limit to the distance over which entanglement can occur. 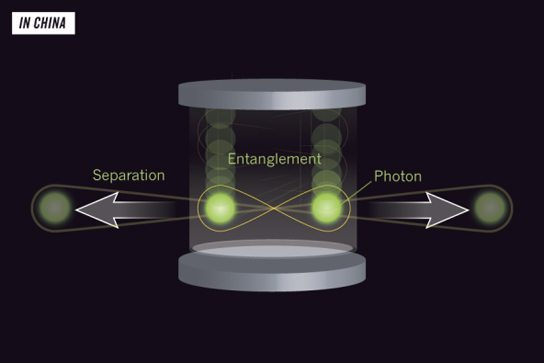 To achieve this feat, a team of Chinese researchers launched a quantum satellite named after the ancient Chinese philosopher Micius into Sun-synchronous orbit last year. Micius has an advanced photon receiver that can detect the quantum state of single photons, allowing the team to confirm that teleportation has been achieved. The team then created entangled pairs of photons and beamed single photons from each pair up to the satellite from a high-altitude ground station in Tibet. They then measured the photon on the ground and compared it to its correlate in orbit to confirm that entanglement had occurred.

The achievement is pretty remarkable in itself, but it also has important implications for the future of a global, unhackable internet built on quantum communications. In quantum cryptography, encryption keys can be encoded into the quantum states of entangled photons to create a perfectly secure method of communication. The quantum states of photons are so delicate that even the simple act of observing them would put them in contact with ordinary atoms and alter them noticeably, making covert surveillance impossible.

While the team’s success is an essential first step toward the creation of a quantum internet, it also establishes China’s dominance in the “quantum space race” in an obvious way.

Others are not so sure, and believe it’s possible that the US and European nations have achieved similar feats under the veil of secrecy. As Christoph Marquardt, a scientist at the Max Planck Institute for the Science of Light in Germany, said to Scientific American, “Some colleague of mine made the joke, ‘the silence of the U.S. is very loud’”.

Read Next: The Companies You Can (and Can’t) Trust with Your Data
Sponsored