When it comes to the cellular industry, unlimited plans are now basically the status quo.

Each of the “Big 4” carriers now offer their own suite of unlimited plans. And T-Mobile now only offers unlimited plans. Suffice to say, with so many “unlimited” plans available, it can be hard to choose between them.

That’s why we’re here to help with our picks for the best wireless plans currently available.

Which Plans Are Available?

Essentially, T-Mobile has three unlimited plans; Verizon has three; AT&T has two, and Sprint has two.

There’s a slew of articles and news pieces breaking down the differences between all of these unlimited plans (this is a good one).

But for the purposes of this piece, we’ll focus on which specific plans we think are best for individual users and their families.

The best plan for you depends on your specific circumstances, needs and preferences. With that being said, we’ve picked out what are likely the best plans for the average cellular customer.

✓ T-Mobile: T-Mobile One Plus

The Uncarrier’s T-Mobile One Plus unlimited plan is an excellent choice for most people. It combines a good suite of options, excellent network quality, and other features that make it attractive.

It costs $80 a month, which nets you unlimited talk, text and data and 10GB of LTE hotspot data. You also get unlimited calls and texts in Mexico and Canada.

T-Mobile One Plus lets you stream HD video. If this doesn’t matter to you, you can save about $10 and go for the company’s lower-tier T-Mobile One plan. Of course, it’s also nice that there aren’t any additional fees or taxes. It simplifies payment.

An additional line of data costs $60, while the third and fourth line will run you $30 each. All in all, that’s $200 a month for four lines. 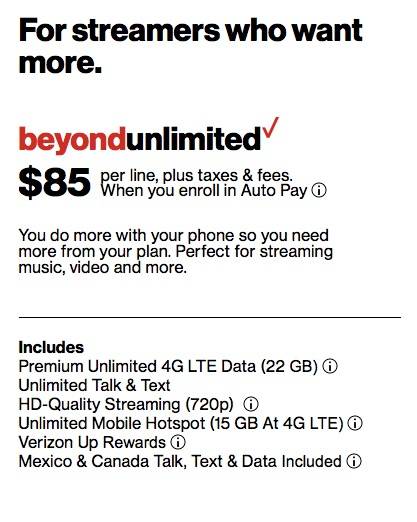 For most people on Verizon, the carrier’s Beyond Unlimited is probably the right choice.

It’s $85 a month and comes with unlimited talk, text and data, as well as 15GB of LTE hotspot data. All of Verizon’s plans let customers use that service in Mexico and Canada.

Like T-Mobile, Beyond Unlimited features HD video streaming. Verizon’s Go Unlimited plan does not and costs about $10 less. While Beyond Unlimited isn’t the most expensive tier for Verizon and lacks the additional perks for that tier, we still think it’s the better deal.

A second line costs $75 a month, while third and fourth lines cost $20 each. Together, that’s $200 a month for four lines of unlimited data. 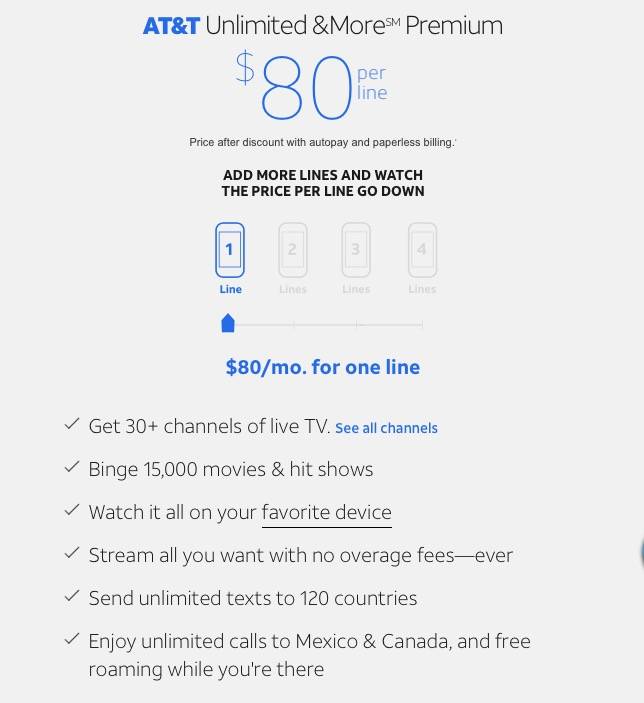 AT&T recently unveiled two new rebranded unlimited plans. The better one for most people on their network is probably the carrier’s Unlimited & More Premium plan.

It includes HD video streaming, as well as free access to AT&T’s TV streaming service: WatchTV. The Premium plan is also packaged with one free premium streaming service, such as HBO, Showtime, or Amazon Music.

Sprint’s higher-tier Unlimited Plus option is probably the best for most users — although there are questions about the quality of the carrier’s network.

At $70 a month, it bundles unlimited talk, text and data. You also get 15GB of LTE hotspot data and 10GB of data for traveling in Mexico and Canada.

You get HD video streaming, but it also includes a free subscription to Tidal and Hulu as part of its bundle. And if you bring your own phone or buy one in full from Sprint, they’ll cut the monthly rate to $50 (this is a limited time offer, however).

The cheapest on this list, a second line of data costs $50 on this plan. After that, it’s $30 per additional line. For four lines, that’s a total of $170 a month before discounts.

Other Things to Consider

The listed prices for the AT&T, Sprint and Verizon plans don’t include taxes, surcharges or additional fees. T-Mobile doesn’t charge these extra fees.

You can also save some additional money by signing up for autopay. AT&T lets you knock $10 off your total monthly cost, while the other carriers offer a $5 a month discount.

Of course, there’s a catch with unlimited plans. Once you hit a certain data cap, the carriers can slow down your speeds temporarily — or for the rest of that billing cycle. Here’s how each carrier says it handles customers who go over that cap.

Read Next: 9 Life-Changing Gadgets All Pet Owners Need to Know About
Sponsored