Following up on a report we published last week indicating that Facebook would soon begin allowing Messenger users to “unsend” their most recently sent message to another user (within a specific window of time), the social-media giant on Thursday officially began a limited rollout of the new feature for its app on iOS and Android devices in select markets, as first reported via TechCrunch.

The feature, officially dubbed Remove for Everyone, will allow Facebook Messenger users to erase their most recently sent message in any chat conversation within a 10 minute period of sending it.

Doing so, however, will result in a “tombstone” icon being left in place of the erased message, effectively informing the person you’re chatting with that you arbitrarily deleted the message, TechCrunch reports, noting that Facebook seems to think this will persuade jerks from taking advantage of the feature to prey on others. 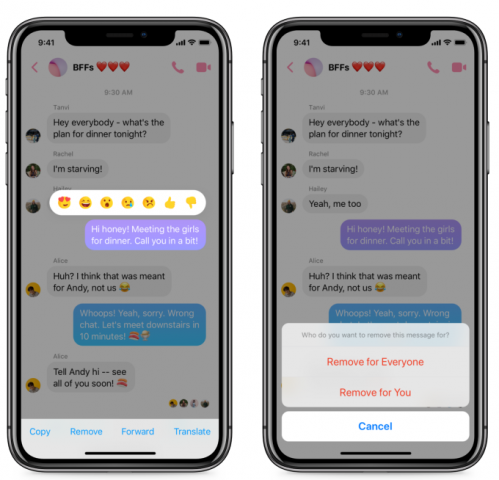 “The pros are that users want to be in control… and if you make a mistake, you can correct it,” Facebook Messenger boss, Stan Chudnovsky, told the publication, adding that “There are a lot of legitimate use cases out there that we wanted to enable.”

Unfortunately, while Facebook has plans to make the new feature available to everyone “as soon as possible,” for the time being, Remove for Everyone is available only to users of the iOS and Android Messenger apps in Poland, Bolivia, Colombia, and Lithuania.