Oh boy, here we go again with one of those exploding iPhone stories. They seem to pop up on the web all too often lately, don’t they? I mean, if a less expensive device burst into flames, we probably wouldn’t even hear about it. But a spontaneously combusting iPhone?

Who’d have ever imagined that a high-quality device like that could be susceptible to such a demise? Well, regardless, here we are, once again. This time, however, the storyline has a bit of an embarrassing, though perhaps somewhat humorous twist. 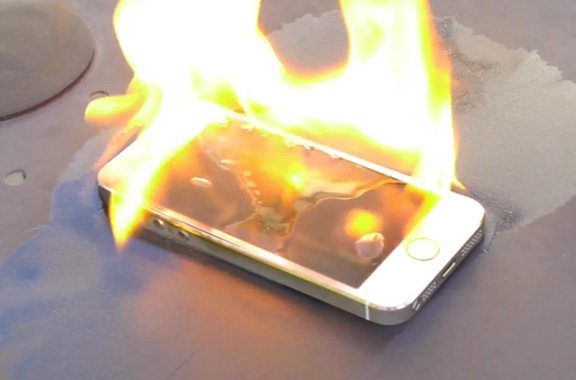 As reported by WSB-TV in Atlanta, a local man’s iPhone 6 Plus just so happened to be the victim in this fiery mess. The man, who wished to be referred to only as ‘Rocky’ was reported to have been walking through a crowded Home Depot parking lot in an Atlanta suburb when he noticed that his Phone was becoming very hot in his pocket. Smoke fumes ensued shortly thereafter, and, sure enough, poof — flames.

Fortunately, however, he reacted quickly enough and instinctively removed his pants and tossed them aside, prior to the situation escalating and affecting him in any way. He sustained no injuries, whatsoever, but only the embarrassment of having to walk around pantsless in a bustling parking lot.

The news report didn’t specify whether or not the phone was new or where it originated from, but apparently Rocky ultimately discovered that, although the device was purchased directly from his carrier, prior to that it was refurbished by a 3rd party.

In the end, Rocky was sent a replacement iPhone from the same refurbishing company, however, perhaps for obvious reasons, he is still somewhat unsatisfied that an official apology has not been issued. After all, I mean, the poor guy had to expose himself to an audience of purveyors in broad daylight. You’d think the least he should get is an apology, right?

In any case, Apple was mum when responding to the situation, saying only that the company would investigate further into the 3rd party refurbishing of the device and that it had no further statements to make at this time.

Still, it makes you wonder what causes a device like the iPhone to spontaneously combust like that, doesn’t it? We’ve seen these occurrences before, but there really is no explanation underlying why they come to play. Some speculate that it has to do with the battery being bent or altered in some way, which could have been the same here — seeing as how the device was refurbished by an outside company. Either way, though, this just goes to show you that we have to be mindful of the devices that we carry around in our pockets, their health and, perhaps even more so, our own. Lest we wind up with a FryPhone on our hands as well.

Continue Reading: Man Sues Apple After ‘Genius’ Deleted All Photos and Contacts from His iPhone