According to an official statement issued by Imagination Technologies on Monday, Apple is planning to withdraw from its licensing partnership with the British components supplier who, since the dawn of the iPhone, has been the sole provider of Graphics Processing Units (GPUs) for a range of Apple products, including the iPad, iPod, Apple TV, and Apple Watch.

Cupertino has apparently notified Imagination of its intent to cease using the firm’s intellectual property in its products at some point during the next 15 months to two-years. If this turns out to be the case, Apple’s decision could potentially devastate Imagination Technologies’ revenue stream, which relies predominantly on royalties and licensing agreements for its various GPU and mobile chip products. The U.K.-based firm is best known for its PowerVR GPU architecture, which has been used under the terms of a licensing and royalty agreement in a wide-range of Apple devices.

The news, which was announced on Monday morning, caused Imagination’s stock price on the London Stock Exchange to plummet by around 70% — before rising slightly during after-hours trading. Cupertino’s licensing and royalty payments to Imagination represented a massive $75.8 million revenue for the firm during the 2015-2016 fiscal year, according to Imagination’s statement, and was expected to rise even higher — to about $81 million — during the fiscal year ending April, 2017. 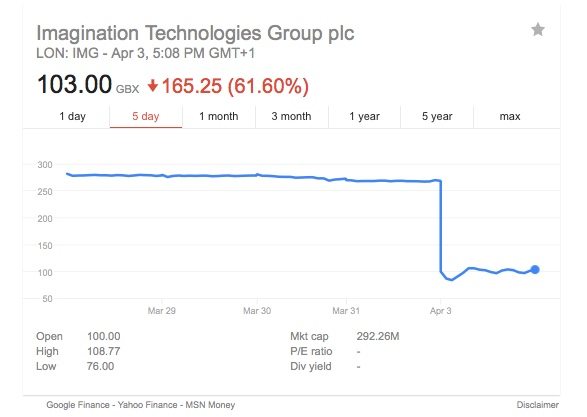 Most notably, Imagination suggested that Apple’s move away from using its products could be an indication that it’s trying to gain more control over the design of its hardware, specifically going on to say that Apple is “working on a separate, independent graphics design in order to control its products.” This would not be a surprising venture, as Apple made a similar move when it transitioned to its home-brewed A-series silicon, from a standardized ARM Cortex v8-based CPU, for the iPhone 4 back in 2010.

It would certainly be advantageous, both for Apple and its customers, if the company were to develop its own GPU architecture. For starters, Apple would save money if it didn’t have to pay royalty payments to Imagination in order to license the firm’s products and, much akin to Apple’s A-series silicon, customers would likely stand to receive a much more powerful, and all-around better performing, GPU in future devices.

However, as noted in its press release, the PowerVR power-broker is also hinting that such a move could ultimately create a messy legal situation between the two firms. That’s because, according to Imagination, Apple has yet to provide evidence that it will be able to create its own GPU architecture without dichotomously violating Imagination’s “confidential information,” such as patents and intellectual property.

Imagination indicated that it has reached out to Apple requesting assurance, or evidence along the lines thereof, however Apple has declined to provide any. We will have to see how this all fizzles out over the next year or so, but in light of Apple’s foiled attempt to outright acquire Imagination Technologies last year, one could assume it’s bound to result in a fiery cat fight.