Back in May, 2015, Apple filed a patent with the European Patent Office (EPO) covering a ‘multimedia-centric video headset’ – a device which, via a connected iPhone or iPad, was designed to provide users with a realistic viewing experience of live events.

Nearly three-years after it’s application was sent into the EPO, PatentlyApple reported that Apple was awarded a similar video display patent from the U.S. Patent and Trademark Office (USPTO).

Titled “Adjusting media display in a personal display system based on perspective,” Apple’s patent essentially describes a “personal display device” capable of providing its wearer with an immersive view — as if they were actually present in a theater, hall or other venue watching a live performance.

The device resembles a wearable, adjustable headset – styled much like a ski mask but equipped with advanced components. PatentlyApple notes that the headset would be able to “provide the user with an opportunity to view media associated with a baseball game,” for example, as if they were watching it in a baseball stadium.

The patent goes on to describe various embodiments of the device and how users can use it to manually select from theaters. According to the patent literature, Apple uses the term “theater” loosely to describe “any suitable movie theaters, performing art theaters, auditoriums, lecture halls, sports stadiums, or any other suitable environment for attending a performance.” 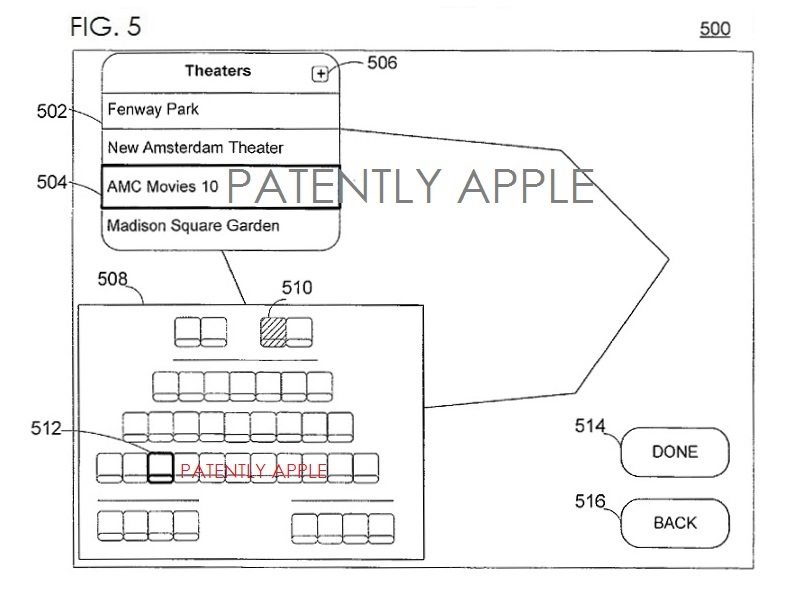 As you can see, FIG. 5 illustrates what the ‘display screen for selecting seats’ might look like through the device’s standard display view.

Users would be able to select a theater from the list (#502, #504) by highlighting and selecting of the options — or add additional theater options by selecting #506.

“Once the user has selected a particular theater from the listings, the personal display device may display a representation of the available seats in seating map #508,” according to PatentlyApple.

Once users select their seat from the venue diagram (#512), “the personal display device may adjust the displayed media to provide a preview of the newly selected viewing position to the user.”

The remainder of the patent literature is devoted to explaining various embodiments of the system — including one describing an advanced, location-based sound profile which could adjust the headset’s audio output in accordance with where a user’s seat is located in the venue. This would allow a user sitting in the front-center of the theater or concert hall to experience sounds much differently than one sitting in the far back.

While it’s unclear what Apple might do with a device like this — especially considering how it’s already rumored to be working on other, conceptually more advanced headset devices. Still, Apple’s patent No. 9,880,720 at the least offers insight into how a device like this would work.