Apple patent No. 20180083620 covers the company’s invention of a proprietary framework comprised of “various structures, methods, and features for new touch and force sensitive rocker switches and similar multiple type input buttons” which could be destined for a future generation of devices from iPad to Apple Watch and more.

Apple envisions a device like iPad featuring standard elements including a touchscreen display, a central processor, rocker switches for power and volume, or other “specialized input button” positioned on one side of the device’s external housing.

The invention calls for a “cosmetic surface” which covers at least the entire button and/or portions of external housing within and around it — as shown in Apple’s patent images FIG. 2 and FIG. 6 below. 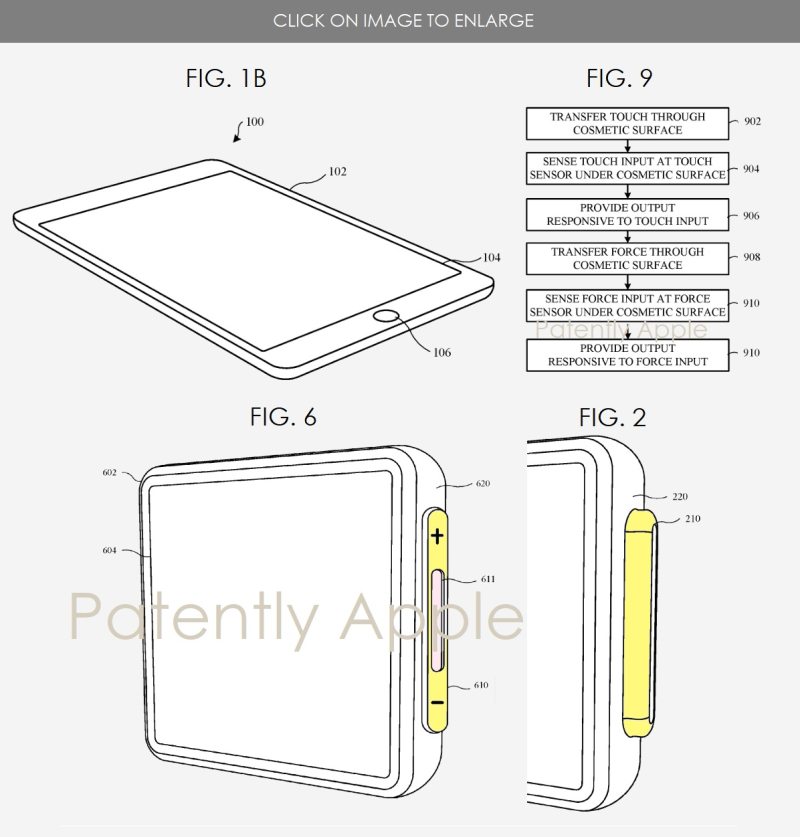 “The button can be coupled to the processor and be configured to accept multiple different types of input,” Patently Apple explains, adding that “The cosmetic surface can transfer each of the multiple types of input there through to the button and also provide a seal to the housing interior.”

“The new switches and buttons may be in-line with the body of the device or slightly risen and offer more control using force touch controls.”

In at least one other embodiment, Apple hints at a future-generation Apple Watch which could replace the mechanical Digital Crown input with a force touch input method.

While the patent application specifically details force touch sensors for iPad and Apple Watch, the patent literature clearly specifies that these “cosmetically pleasing capacitive buttons” could just as easily be incorporated into other devices like iPhone, iPod touch and more.

Given this is merely a patent application, there’s no telling at this point whether a future generation of Apple devices will feature these revamped input methods.