The highlight of Apple’s “Hello Again” event has finally arrived with Tim Cook’s introduction of the 2016 MacBook Pro and its highly anticipated Touch Bar. “The Mac is so incredibly important to us,” Cook said shortly before cueing the intro video and handing the stage over to Phil Schiller to unveil the newest MacBook Pro. “This week happens to be a huge week in the history of the Mac, and the history of Apple. This week is the 25th anniversary of our first notebook.”

By that, he was referring to the very first PowerBooks, which Apple released in October 1991. In any case, it’s been four years since the last significant reboot of the MacBook Pro, so this keynote has been a long time coming in more ways than one. Let’s dive in.

The latest MacBook Pro features an all-aluminum body. It is also the thinnest and lightest ever and comes in two color options– Silver and Space Grey– as well as in two sizes– 13-inches and 15-inches. The 13-inch model is 14.9 mm, which is 17% thinner than the last model’s (18 mm). It weighs 3 pounds, down from 3.5 pounds. It’s also 23% smaller in volume. The 13-inch model actually comes in two variants, which are priced at $1499 and $1799 respectively. The cheaper one doesn’t come with the Touch Bar and features an Intel Iris Graphics 540 chip, Intel Core i5 processor, and two Thunderbolt 3 ports. 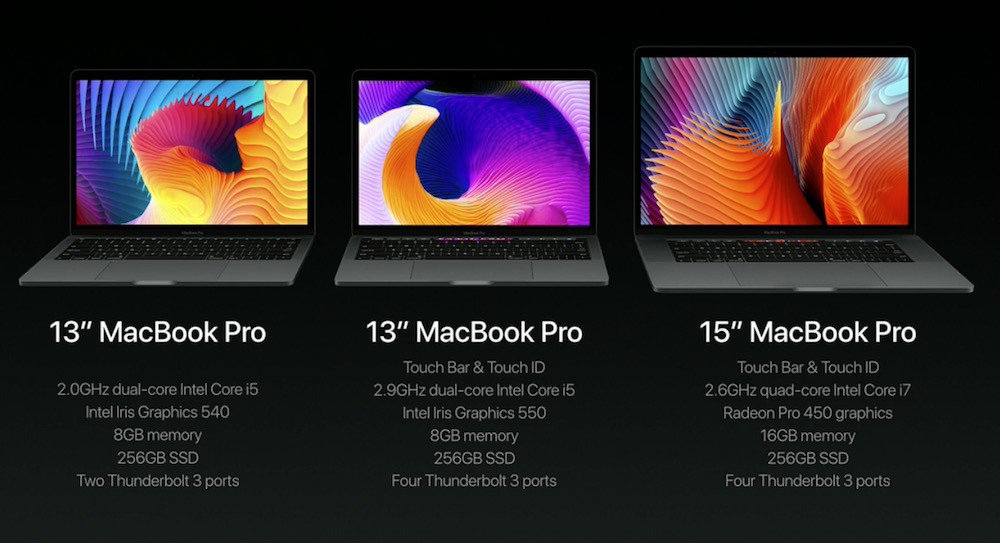 The more expensive flavor comes with the Touch Bar (which we delve into below in further detail) and features an Intel Iris Graphics 550 chip, a faster Intel Core i5 processor, and four Thunderbolt 3 ports. It’s 103% faster for gaming and 76% faster for 3D graphics. The 15-inch model is 15.5 mm, down from 18 mm, and weighs 4 pounds, down from 4.5 pounds. By volume, the 15-inch model is 20% smaller, but that clearly hasn’t affected its performance.

This juggernaut retails for $2399 and comes with the Touch Bar, obviously. It features a quad-core Intel Core i7 processor, Radeon Pro 450 chip for graphics, and four Thunderbolt 3 ports. It is 130% faster for 3D graphics and 60% faster for gaming. Its display is 67% brighter, has 67% higher contrast ratio, and shows 25% more colors. And for good measure, the speakers have been amped up and improved allowing double the previous range.

Every Thunderbolt 3 port on the aforementioned models can be used to charge your device and also support USB, DisplayPort, VGA or HDMI, using adapters.

The newest MacBook Pros’ trackpads are Force Touch-enabled and are now double the size of their older counterparts. Their keyboards have also been updated with the second-generation butterfly switch mechanism, similar to what we saw in the latest 12” MacBooks. On the other hand, one thing that has stayed the same is the headphone jack, which is thankfully still there.

But the crown jewel of the updated MacBook Pro is undoubtedly the Touch Bar, an OLED retina display with multi-touch input, which is replacing the old function keys.

Besides handling volume and brightness controls (and other typical functions) and coming with a default Siri key, the Touch Bar changes dynamically based on the tasks you’re performing and what apps are in use. It mostly supports native Apple apps, but also integrates third-party apps like Microsoft Excel, Microsoft Word, Skype, Adobe Photoshop, and djayPro.

For instance, if you’re using Mail, the Touch Bar features functions for flagging spam, moving messages to folders, discarding emails, etc. In Safari, it offers a preview of your open tabs as well as access to your favorite sites.

Touch Bar is also great if you’re a designer because it allows you to work your craft while in full screen, displaying useful tools neatly on the Touch Bar, without cluttering the view of your project. For example, the Touch Bar allows you to apply a slew of different edits and effects when using Final Cut Pro, and rework photos on Photoshop.

And in iMessage, the Touch Bar features a full roster of emojis to choose from, which, by its own merits, justifies purchasing this stellar device. The Touch Bar also comes with a predictive feature that learns to foresee the words and phrases you’re trying to type.

You can also use the Touch Bar to toggle between apps such as Facebook, LinkedIn, and Google. If you’re not a fan of its default layout, fear not, because the functions of the Touch Bar are fully customizable.

Finally, the rightmost corner of the Touch Bar has a Touch ID sensor that lets you unlock the MacBook and even switch between multiple user accounts. It’s also worth noting that the Touch ID supports Apple Pay, which uses a T1 chip to secure your fingerprint so you can authenticate purchases without fear.

The 13-inch model without Touch Bar and Touch ID ships today. The other two models start shipping in two to three weeks.

What are your thoughts on the new MacBook Pro?
Let us know in the comments below!