The Apple TV has finally entered the world of 4K. On Tuesday, the company unveiled its appropriately named Apple TV 4K, a next-generation set-top box with 4K streaming, HDR and a huge boost in processing power.

In addition to the new 4K device, Apple will continue to sell the fourth-generation Apple TV. This is how the two set-top boxes stack up.

First off, the Apple TV and the Apple TV 4K will share a number of similarities in capability, software and hardware. These are the features that aren’t changing in the next-gen box. 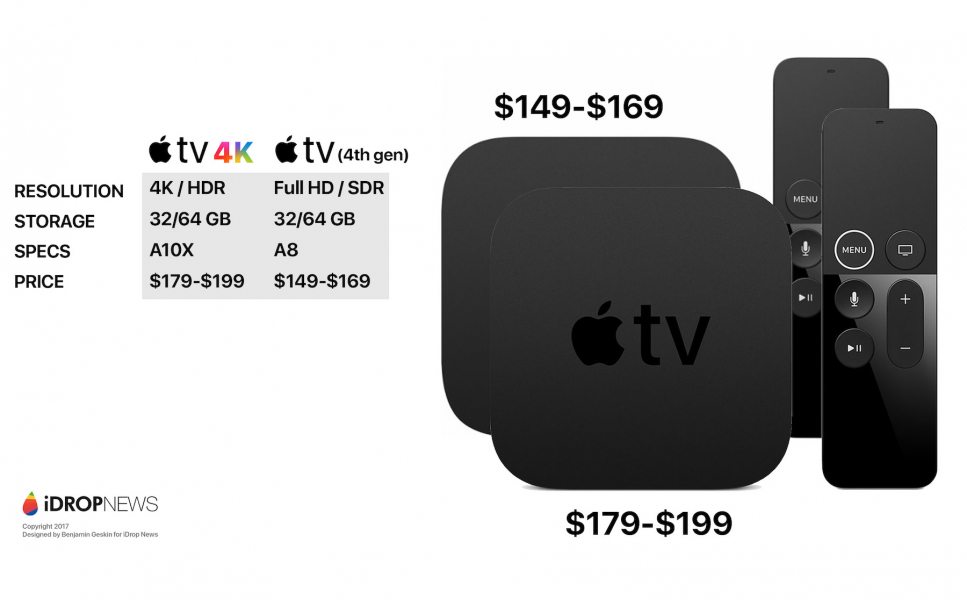 Despite the similarities between the two Apple TV devices, the Apple TV 4K sports a number of significant upgrades in resolution, processing power, and other minor specifications.

The biggest difference between the two boxes will be in terms of resolution. While the Apple TV will remain in HD, the Apple TV 4K — like its name suggests — will be able to stream 4K content with support for various HDR standards. Here’s the specifics.

Basically, the Apple TV 4K will be getting a big boost as far as resolution goes. Specifically, it’ll be able to output about four times the amount of pixels than the non-4K Apple TV.

HDR is also a big deal and goes beyond pixel resolution. For consumers, the addition of HDR support will mean better display quality, more visible colors and much brighter overall pictures.

Additionally, the Apple TV 4K is getting a huge boost in processing power. Essentially, the next-generation set-top box will be just as powerful as Apple’s iPad Pro lineup.

The Apple TV 4K gets a massive upgrade in terms of processing power. If you care about buffering time, you’ll definitely want to opt for the higher-end set-top box. Additionally, the Apple TV 4K’s chipset will allow it to play games and run apps like never before — also something to consider.