It’s really no secret that Apple has been gearing up to make a splash in the Augmented/Virtual Reality (AR/VR) scene. And while the Silicon Valley tech-giant’s entrance into the relatively young market certainly wouldn’t mark the first of such tech luminaries to hop aboard the VR bandwagon, Apple’s is a move that most iPhone owners have been eagerly anticipating for a while now.

Well, hang on to your hats, because it appears that Apple was recently granted a patent for its own proprietary VR headset. Taking the traditional concept of said headsets a step further, however, Apple’s embodiment will reportedly feature a slew of Apple’s magic tricks built-in specifically to work with the iPhone as the engine driving it all, according to PatentlyApple. 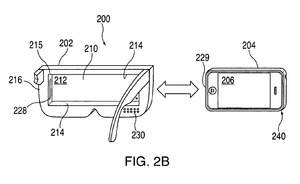 Additionally, as PhoneArena notes, Apple’s embodiment of the VR headset would be similar, yet fundamentally different, from the current slate of VR headsets on the market — such as those offered by Samsung, Google, and Oculus. Similar to those units, a user’s smartphone (in this case, an iPhone) will be plugged directly into the front of the headset, itself, via a jack located along the perimeter of the lens.

However, taking things a step further, Apple’s patent details a seemingly futuristic process by which a built-in touch pad, sensors, and buttons will allow users to focus in on the image that appears onscreen before their eyes. While the headset, itself, will feature its own selection of sensors and buttons, the breadth of its features — including audio playback and touch controls — will be powered directly via the iPhone plugged into it.

Moreover, Apple’s patent outlines how a series of head straps will be employed to help keep the device firm in it’s place; and how, located directly underneath the display area, will be an undisclosed number of ports, a jack, and buttons to help control the device — while all the circuitry, sensors, processor, memory, and battery will be tucked away underneath as well.

Figure 3A, as you can see below, also shows the possibility of the headset being controlled by an external remote control of some sort, almost like an Apple TV remote (#322). 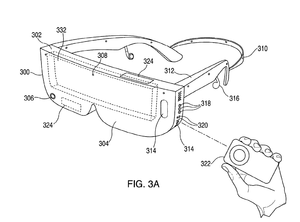 Cupertino was originally granted its VR headset patent — US. Patent No. 9,482,869 — back in early 2015, however it was first published by the US Patent & Trademark Office earlier this week.

It’s interesting to see how Apple has taken it slow with the development of its VR technology. While other manufacturers, including Samsung and Oculus, have rushed their VR products to market in an attempt to swoon early adopters into their court, Apple, as usual, appears to be taking the high road — opting, instead of jumping the gun, to perfect its product, which means it’ll more than likely be a cut above the rest when it does hit the market. No word on when or if that will happen, of course, but it’s almost a certainty at this point.

Are you excited about the future of Apple’s AR/VR endeavors? Let us know in the comments!