Apple has applied for a patent that details a system to bring immersive virtual reality experiences to self-driving vehicles.

The VR system would be able to radically alter the car’s interior and the view of exterior environments.

The patent, which was first spotted by VentureBeat, lays out some interesting context: rather than windows, it imagines future vehicles using interior displays and VR headsets to show passengers the real-world environment. But these screens and VR headsets, the patent contends, could also show predetermined scenes or virtual scenarios rather than simply displaying the world around the vehicle.

In other words, it could transform a daily commute into a totally different experience. “Passengers may choose to have relaxing visual experiences … such as floating down a river or soaring over the landscape in a hang glider,” the patent reads.

More interestingly, it also describes more “exciting” virtual experiences, such as a car chase or “driving through a post-apocalyptic wasteland with zombies…” In that latter virtual scenario, Apple describes how the experience could make it seem like a car is stalling when it’s routinely stopped at a red light to “build suspense.” 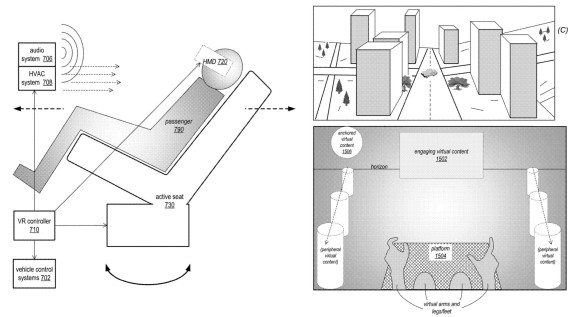 The patent describes other use scenarios, too. It could make smaller vehicles appear much more spacious, for one. Or users could opt to have a virtual author read an audiobook, live stream virtual work meetings, or reenact car chase scenes from their favorite films.

While it’s being framed as a way to help users mitigate motion sickness, the patent does sound like a way to make routine drives both more productive and interesting.

It also hints at Apple’s larger goals for its long-rumored self-driving vehicle initiative. The so-called Project Titan is focused on developing autonomous systems — and while once shrouded in secrecy, it’s quickly becoming one of the largest autonomous vehicle projects in the U.S.

Apple first applied for the patent in September 2017. It was published on March 29 by the U.S. Patent and Trademark Office.

Of course, this is just a patent application. There’s no guarantee that the tech described in it will actually make it to the market. That might be especially true in this case, since self-driving car systems are still imperfect and not safe enough for fully autonomous use.

Because of that, there’s no clear indication of when we might be able to drive through virtual zombie hordes on our daily commutes. But it might be a while.

Read Next: Smugglers Used Drones to Move $80 Million Worth of iPhones in China
Sponsored