Apple may be excited about pushing its 3D Touch technology as far as it can, but that doesn’t mean that it’s loosening its iron-grip on the App Store and the kinds of apps allowed on the store, even if those apps are seemingly great ideas that implement 3D Touch. 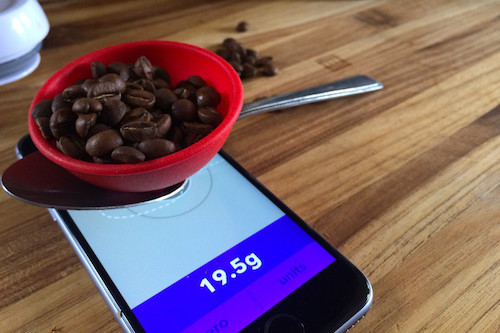 One such app is called “Gravity,” and it basically uses 3D Touch to allow users to weigh items straight on the iPhone 6s screen. Obviously users wouldn’t weigh themselves on their own phone, but the item to weigh is really up to the user’s discretion.

The app itself was developed by Ryan McLeod along with a few of his friends, who have been working on the app ever since the new line of iPhone’s were announced back in early September. The app basically uses 3D Touch technology and encourages users to place a spoon on the display, after which they can weigh things like powders, small fruit, dry mixes, and so on.

Once they were able to get the new iPhone in their hands, the team calibrated the sensitivity for the weight measurements, using things like coins and a spoon. This was one of the biggest challenges that the team faced, with Apple’s 3D Touch API having its own custom scale, from a measurement of 0.00, up to “maximum possible force,” with a measurement of 1.00 being the “average touch.” To calibrate, the team used things like a nickel, with the team already knowing what the weight of the nickel is. Of course, the other problem was getting the screen to recognize input at all.

“We needed an object that was conductive, had finger-like capacitance, formed a single finger-like touch point, was a household item, and could hold items to be weighed,” wrote McLeod in a blog post on Medium. The solution was a spoon.

In fact, the team was able to finish the app within four days of getting the new iPhone, and then submit it to Apple along with some marketing material. Apple soon, however, rejected the app for having a “misleading description.”

According to McLeod, he puts the reason down to being the fact that there are a number of “digital scale” apps on the Apple App Store, however those apps can’t actually weigh anything and are there for “entertainment purposes.” The team behind the app then resubmitted it, this time including a video that showed what the app could do as part of the marketing material, however the app was once again rejected, this time being told that “the concept of a scale app was not appropriate for the App Store.”

Why is this, I hear you ask? Who knows. A number of media outlets have reached out to Apple to find out exactly why the app wasn’t “appropriate,” however Apple has yet to respond with any comments. It’s certainly possible that Apple is worried that users will break their screens using the app, however this would not explain why the joke scale apps were allowed on the App Store. As The Verge suggests, it’s also possible that the company is worried that the app will be used to weigh drugs, however real drug dealers would probably prefer to spend the $20 for a more accurate scale. Last but not least, is the possibility that Apple just doesn’t really know what to think about the idea, so it defaults to saying no.

This is not, however, the first time that the idea of a scale has been implemented. At the unveiling of the new Huawei Mate S, which has a rival 3D Touch technology, the company used the phone to weigh an orange. Whatever the reason that the app gods over at Apple have chosen, McLeod and his team say that they respect the decision.

“We have a strong respect for the subjective process Apple uses to maintain a selection of high quality apps,” continued McLeod in the blog post. “But [we] do hope for a day when Gravity can be one of the hand-picked, who-knew-a-phone-could-do-that-apps anyone can download on the App Store and have in their pocket.”

Only time will tell if scale apps ever end up on the App Store. Here’s to hoping that Apple realizes how genius the idea is and ends up allowing the app at some point in the near future.