While the historic release of its powerful (yet incredibly expensive) iMac Pro largely dominated news headlines on Thursday, Apple seized on the opportunity to reiterate amid the hysteria that it’s currently working on other ‘Pro’-grade hardware, too — including an upgradeable modular Mac Pro computer.

Towards the end of its official press release announcing availability of iMac Pro, Apple appeared to appease its other ‘Pro’ customers by briefly mentioning the hardware’s ongoing development.

“In addition to the new iMac Pro, Apple is working on a completely redesigned, next-generation Mac Pro architected for pro customers who need the highest performance, high-throughput system in a modular, upgradeable design, as well as a new high-end pro display,” Apple said.

Interestingly, while this wouldn’t be the first time we’ve heard of Cupertino’s plans to develop a modular Mac Pro, the company clearly wants us all to know — loud and proud — that it’s still dedicated to its original, ultra high-end Pro desktop, and that we can expect the ‘completely redesigned, next generation’ computer soon enough.

When will it launch? We really have no indication at this point, unfortunately — however given the intriguing fact that Apple essentially spilled the beans, it’s not unreasonable to assume we could hear more about the machine in 2018 or 2019. Not to mention, but we’re coming up on the fifth year now since Apple last refreshed its Mac Pro in 2013; so a high-performance Mac Pro boasting an upgradeable design sounds about ripe for picking, doesn’t it?

Sadly, we also don’t know what the new Mac Pro will look like at this point — however given it will embody a modular, user-upgradeable form factor, it may take on the shape and dimensions of a taller, wider ‘tower’ design (similar to Apple’s 2012 Mac Pro) as opposed to the current Mac Pro’s ultra-compact, cylindrical shape. 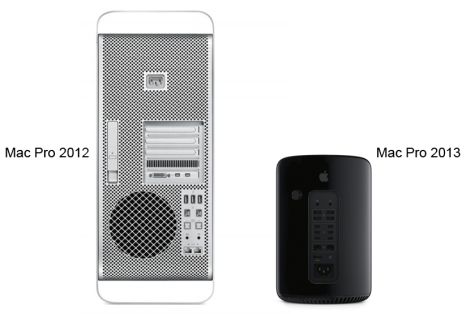 Regardless of its physical footprint, Apple promises that the upcoming Mac Pro will embody a “high-performance, high-throughput” system — suggesting it will not only boast an array of powerful components which could even outperform the iMac Pro, but will likely be even more expensive to boot. It was revealed that a top-tier iMac Pro configuration, boasting an 18-core, 2.3GHz Intel Xeon W-class processor, 4TB of SSD storage, 128GB of ECC RAM, and AMD Radeon Pro Vega 64 graphics with 16GB of HBM2 memory, will run customers a whopping $13K.

Meanwhile, Apple also mentioned that it’s working on a new “high-end Pro display,” which will likely embody a redesign of its classic Thunderbolt display introduced back in 2011 and discontinued last year . This is certainly welcome news for fans of the high quality Apple-branded display, which was discontinued and replaced for the time being with Apple and LG’s UltraFine 4K and 5K Monitors.