If you pick up your iPhone and ask Siri when the Worldwide Developers Conference will take place this year, she will give you a very definitive answer – June 13th through June 17th in San Francisco.

Siri’s response was discovered yesterday morning by several users on the internet. It didn’t take long for Apple to confirm what Siri was already telling everyone – the company issued a press release affirming the date, adding that the event will take place at the Bell Graham Civic Auditorium. 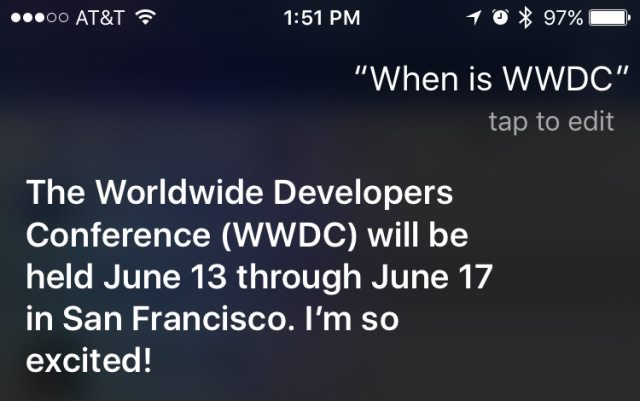 During this year’s WWDC, Apple will give us our first official look at iOS 10, as well as the new Mac operating system (which may be re-branded as macOS), tvOS, and watchOS updates. On the official WWDC website, Apple promises “exciting reveals, providing inspiration and new opportunities to continue creating the most innovative apps in the world.” If you remember, last year’s WWDC brought us the launch of Apple’s streaming music platform, Apple Music, as well as the official release of OS X El Capitan, iOS 9, Apple Maps transit directions, and more.

Although the WWDC typically sticks to software updates, rumor has it that Apple will unveil brand-new, ultra-thin 13 and 15-inch MacBooks during the event. The source of the rumor claimed that the new MacBooks will be released in the “second half of 2016”, but we are hoping to see the two new devices much sooner than that. Another rumor, a bit more far-fetched, also places the release of the Apple Watch 2, said to be “20 to 40 percent thinner” than the previous model, at the June event.

Developers willing to shell out the $1,599 for a ticket can register for the event at the WWDC website until 10:00am PDT on Friday, April 22. As Apple has done in years past, the company will issue tickets via a random selection process – those who applied will be notified if they are able to attend by Monday, April 25 at 5:00pm PDT.

Learn More: Apple Surprises Everyone With a Massive Update to the 12-Inch MacBook

What are you looking forward to most during this year’s WWDC? Let us know in the comments.