Battery Health (Beta) is now available to help iPhone users not only gain an understanding of their battery’s estimated capacity, but to also look into its longer-term performance — features aimed at helping users ascertain whether their device is being throttled (or slowed down) due to the natural and unavoidable degradation of their Li-ion batteries.

The main goal of performance management is to help users whose devices are running on a dwindling battery by throttling the CPU in a bid to save power and prevent random shutdowns.

This setting is disabled by default, according to Apple, on all iPhone 6, 6 Plus, iPhone 6s, 6s Plus, iPhone SE, iPhone 7 and 7 Plus devices which have been upgraded to iOS 11.3.

iPhone 8 and iPhone X devices, meanwhile, are built around a more “fine-grained and adaptive” system boasting advanced hardware upgrades over their predecessors which enable the application of these power management tools employing a more ‘on-demand’ mechanism. What this means, in other words, is that performance throttling on iPhone 8 and iPhone X will be less noticeable than on devices like the iPhone 7, iPhone SE, iPhone 6 and 6s and their plus-sized constituents.

iPads will not be impacted by this performance throttling since they’re equipped with much larger capacity Li-ion batteries that take longer to degrade.

How to Enable and Disable Performance Throttling

First, you’ll want to ensure your device is upgraded to the latest version of iOS 11.3.

After the update, or if you’re already running iOS 11.3,

“The Maximum Capacity readout gives an estimate of the amount of total capacity the battery can hold,” and while brand-new (or newer) iPhones “should report 100% capacity,” users should be warned that a lower capacity means their iPhone won’t last as long between charges.

The next box down in this new menu is ‘Peak Performance Capability’, which can be tweaked only if the battery management (throttling) setting has been activated as the result of battery capacity dipping far below 100%. 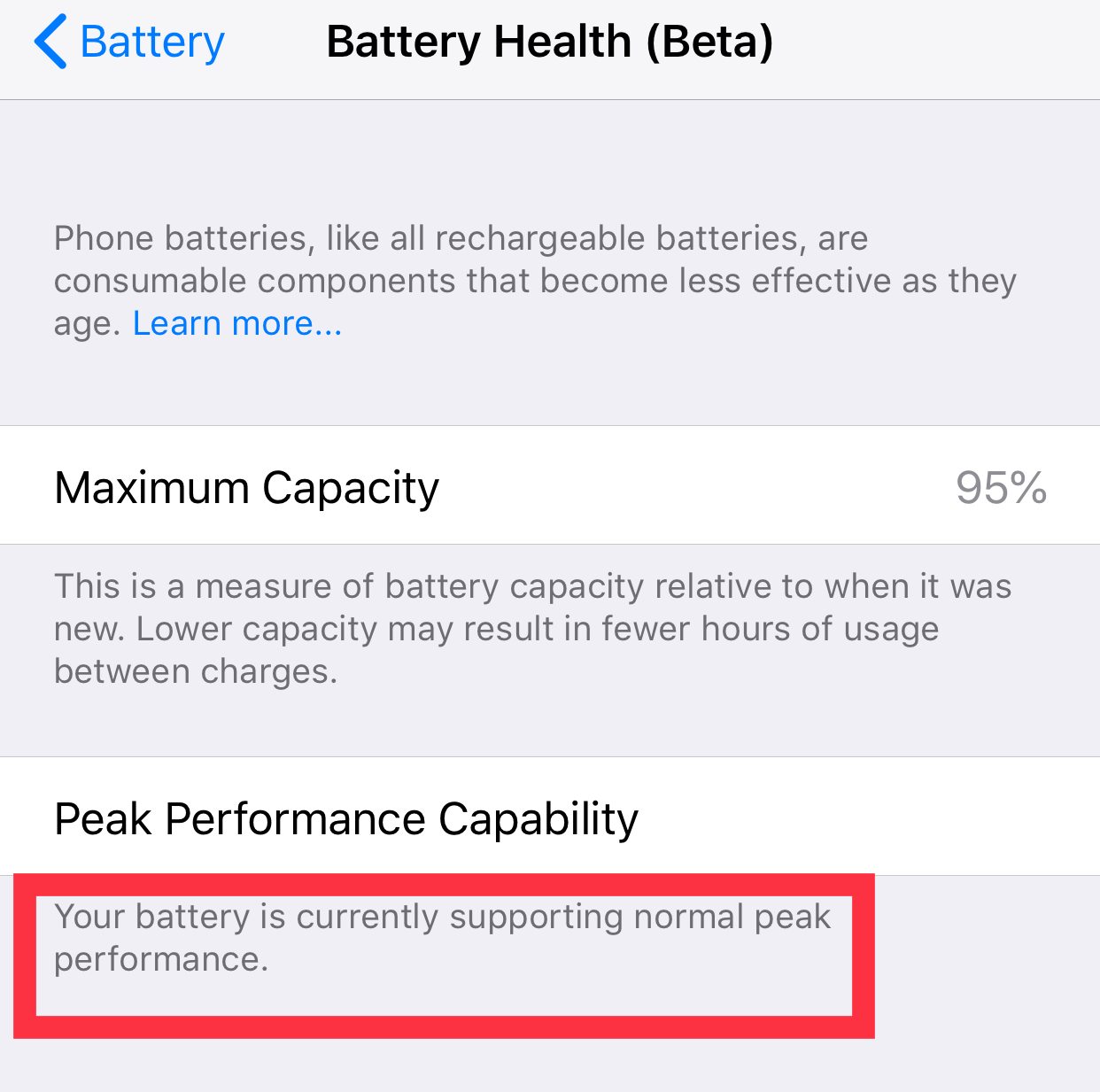 NOTE: If your battery is performing at peak power and capacity of 100%, you will neither be able to enable or disable these power management settings and should consider your battery in good health (until further notice).

If your device dips below 100% and experiences an “unexpected shutdown,” this setting will automatically enable power management throttling.

And, upon the device rebooting, a notification will be displayed on the Lock screen warning about what just happened, saying something along the lines of “This iPhone has experienced an unexpected shutdown because the battery was unable to deliver the necessary peak power. Performance management has been applied to help prevent this from happening again.”

Should your iPhone experience an unexpected shutdown — but you don’t want your performance to be throttled — you’re free to either disable the throttling feature altogether or send your device in for a $29 battery replacement as pursuant with Apple’s ongoing (but soon ending) replacement program.

To Disable performance throttling, you’ll want to tap on the very small, blue text that says Disable — at which point your iPhone will display a message on screen indicating that performance management has been disabled.

NOTE: By disabling performance management, you wont be able to re-enable or take advantage of these tools until the next time your device experiences an unexpected shutdown.

Meanwhile, every time your device shuts down as the result of a degrading battery, this performance throttling feature will be re-enabled automatically. That’s the way Apple designed this feature, to help preserve battery performance even at the expense of raw CPU performance.

Last but not least, for those whose iPhone battery capacities have dipped below 80% — a state of serious degradation — the device will display a message suggesting that it may be time to have the battery replaced by Apple or an Apple authorized service provider.

NOTE: Once your battery capacity has dipped below the 80% threshold, it’s still possible to disable performance throttling as mentioned above — however, be warned that the likelihood and frequency of unexpected shutdowns occurring will increase after that.

In some rare instances, Apple says, iOS may be unable to determine and provide insight into your device’s battery health — and if that’s the case, users should expect to see a similar message indicating the it may need battery service.