With the release of iOS 10, Apple informed their publisher base about the new reporting capabilities for Apple News. If you choose the Apple News Format to post articles to your Apple News feed, you’ll be able to take advantage of Apple’s proprietary reporting tool in iCloud’s News Publisher section. This tool gives you access to see to following analytics:

However, if you choose to use RSS feed for Apple News, you currently can’t track your referral traffic from apple.news. We’re uncertain why that’s the case. Many publishers will still choose the RSS format to better monetize users transitioning from Apple News to their websites. This transition is almost impossible for users that visit your content posted through the Apple News Format. This is simply because Apple wants all traffic inside their app, rather than losing users to your website. We agree that from the user point of view, it is a better experience as the speed of in-app browsing is significantly faster than most websites. This replicates Facebook’s Instant Articles, Google’s AMP pages, or Flipboard’s new in-app model. Today, only some publishers have the option to monetize their in-app traffic through iAds. We’ll need more empirical data to asses the effectiveness of iAds. Currently, we don’t believe they are as effective as Adsense.

At iDrop News, we have access to Google Analytics (GA) as well as the more premium version, Google Analytics 360. We chose to use the RSS feed and GA identifies traffic originating from the Apple News app as source = direct and medium = none. And yes, we’re waiting for Google to make changes so the dashboard displays Apple News the same way as e.g. Twitter, Facebook, or StumbleUpon sources.

While it wasn’t perfect, at one point we could segment traffic by browser to see Apple News web hits specifically. In Audience > Select Technology > Then select Browser & OS.

Under “Browser”, you were able to see Apple News. If you didn’t see it right away, you could have tried to search with the magnifying glass tool. “Apple News” might be buried in the long tail of browsers. 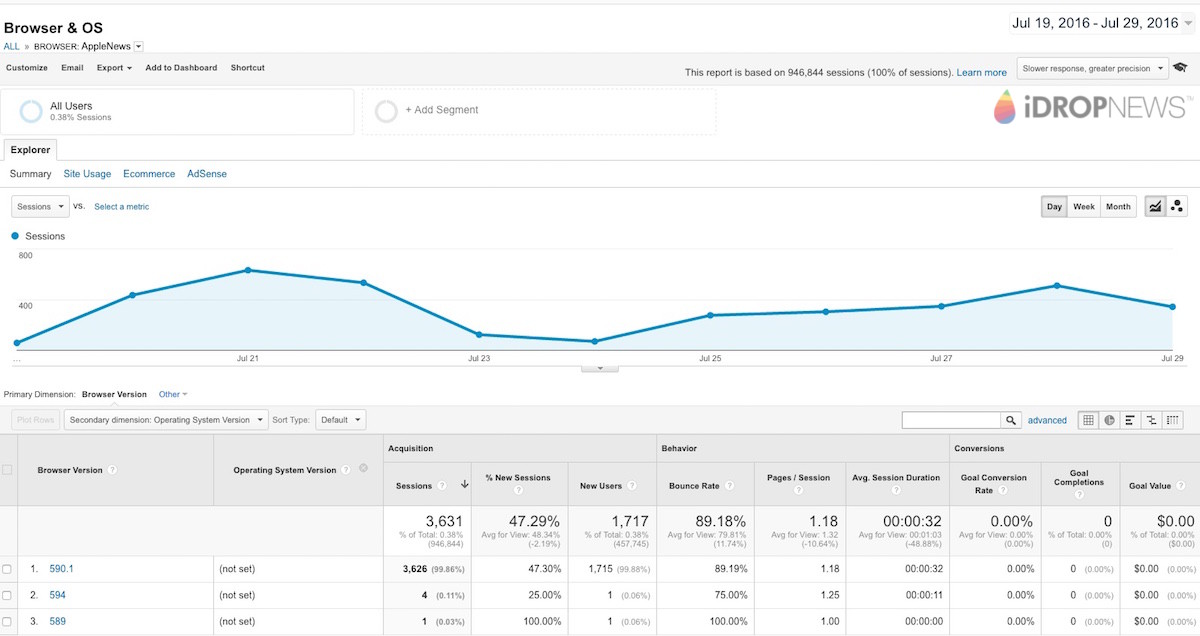 It’s clear to see that Google still has some work to do to accurately track Apple News traffic. Google also hard time identifying the operating system. 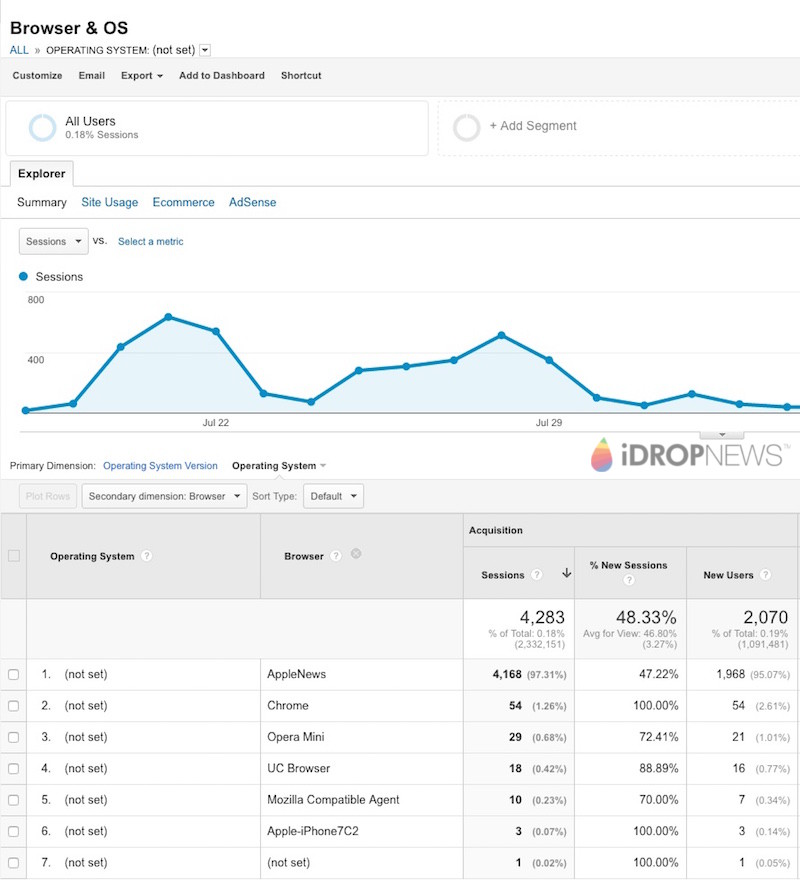 The final release of iOS 10 addressed some issues, but not all. We’re under the impression there are many web hits still coming from the Safari (In-App) browser as well.

Update(1): The internet is a fast paced eco-system where changes happen daily. Since posting this article, we haven’t been able to see significant Apple News traffic in Google Analytics. However, the period in which we could see Apple News traffic lasted from July 17th – August 3rd. After these dates, Google or Apple reverted back to the old setting where Apple News traffic is not recognizable from the rest of our In-App Safari traffic.

Update(2): iOS 10 has been officially released and we’re still unable to see Apple News traffic as a measurable portion of our In-App Safari traffic.

Update(3): Based on SlightFuture’s findings, we are implementing a weblog parser to count daily web requests coming from a user-agent string including “News/” and “AppleNews/”. This is only a temporary solution until GA starts displaying more substantial real-time data. Stay tuned for results.

Update(4): We’ve added an SSL certificate to transition to HTTPS. As soon as as we fully executed this move and updated our Apple News account profile, we started seeing a little bit of traffic from https://apple.news. In layman’s terms, the referral tag is now passing through the secure protocol. However, from our internal estimates, over 90% of traffic coming from apple.news still comes as source=direct, medium=none.

Let us know what you are seeing in your Google Analytics in the comments below. Do you have an SSL (https://) website? Does you apple.news referral pass?