There’s really no other way to put it: I miss Slide to Unlock. And ever since Apple killed the feature in iOS 10, I’m sure many of you miss it too. I don’t think anyone can blame us, Slide to Unlock was literally the first thing we saw an iPhone do, during the first iPhone announcement event in 2007. And, at the time, it drew applause. In the following years, Apple’s innovative touchscreen fostered in a new generation of smartphones and user interfaces.

Other companies were apparently inspired by that innovation, too. Let’s not forget the court case in which Apple claimed Samsung infringed on its design patents, including Slide to Unlock. So while Cupertino might not have been the very first to come up with a similar feature, it certainly was responsible for popularizing it.

Slide to Unlock has been ubiquitous since the very beginning of iOS — even before it was called iOS. So I can’t be the only one who keeps sliding to the right in an attempt to unlock my phone — only to be greeted by Apple’s new, and admittedly useful, widget screen. For those of us who have owned iPhones for any length of time, Slide to Unlock has undoubtedly become muscle memory.

Since the very beginning, Slide to Unlock was an iconic piece of user interaction. It was easy. It was intuitive. And, after its implementation on the first iPhone, it seemed pretty obvious. But it really was a beautifully designed and executed little idea, if only because of its simplicity. Business Insider has called it “one of the most important gestures” Apple has created.

And even though many of us have switched to using Touch ID to unlock our phones, just knowing that Slide to Unlock isn’t there anymore is almost sad. In some weird way, it feels like saying goodbye to an old friend, and an ever-present trusty companion.

But like the headphone jack, and even like the skeuomorphism of old iOS versions, Apple is obviously just continuing to reinvent itself and its devices. There’s no doubt that they’ll keep innovating in the coming years, even if there are some unexpected casualties along the way. And yes, in time, we’ll all get used to ‘Press home to unlock’, or whatever other system Apple comes up with in the future — even if the relearning process is a bit annoying. 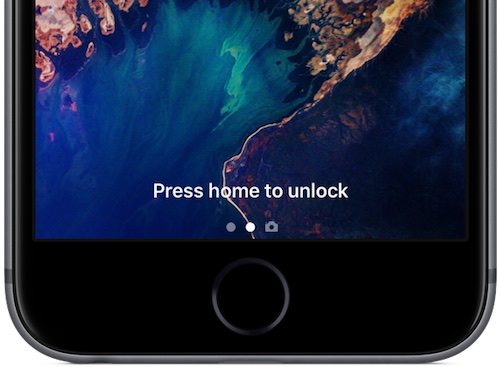 So, yes: Slide to Unlock is gone, and I am sad to see it go. Yes, I can justify that Apple is just making room for something else, maybe even something more useful and important. But I know that, in the years to come, I’ll remember Slide to Unlock’s chapter of iPhone history with no shortage of nostalgia.