Shortly after Apple launched its iOS App Store on July 10, 2008, the company received an influx of new app submissions from burgeoning developers all around the world. And while the App Store dynamics may have changed quite a bit since those early days, we can’t forget about some of the earliest and most controversial app store submissions.

The majority of customers visiting Apple’s iOS App Store likely do so with the intention of spending anywhere between zero and perhaps $10 or $20. Most apps, including games, are now offered as free-to-download and generally feature an assortment of $2, $3 or even $5 in-app purchases meant to enhance your experience using it. The majority of high-quality professional-grade apps, such as VizzyWig 4K photo and video editor, can run up to $99.99.

But one of the most bizarre and functionally pointless titles, dubbed ‘I am Rich’, which was offered for download by its German developer, Armin Heinrich, for a whopping $999!

The mid-2008 application was essentially devoid of any useful features and was otherwise “useless” according to a CultofMac report. 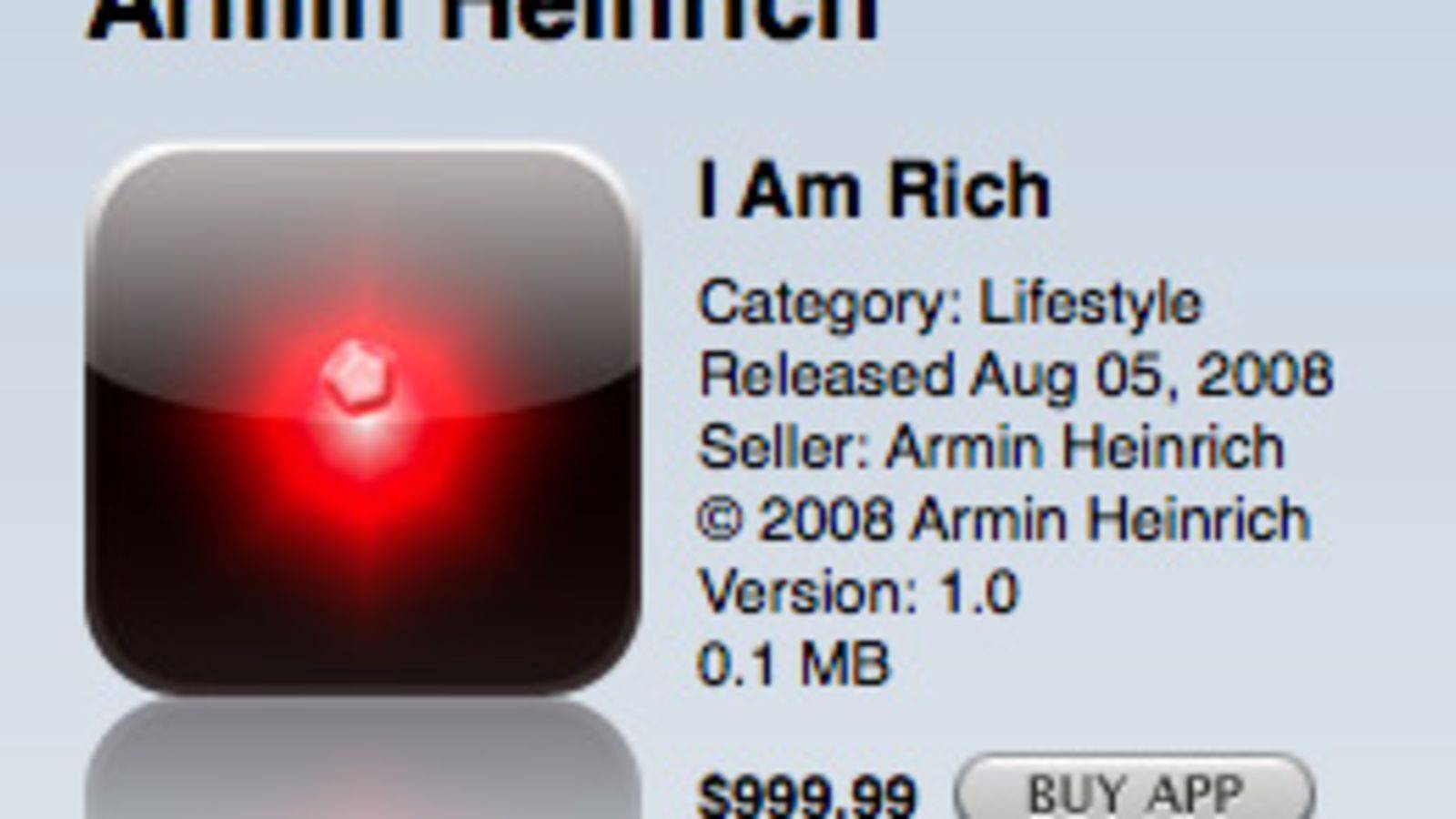 Within just weeks of being released for download, Apple caught wind of ‘I am Rich’ and abruptly removed the title from its iOS App Store, as reported by The Los Angeles Times backin August 2008.

It was only following the controversy and outcry over the app’s thousand-collar buy-in price that its creator actually spoke up and defended his decision to offer it in the first place.

“I found that some users complain about prices for iPhone applications above 99 cents,” Heinrich told the paper in an interview, adding that “I regard it as art. I did not expect many people to buy it and did not expect all the fuss about it.”

The app itself, which did “nothing useful,” would display a red jewel on the user’s display upon being opened; and, once the jewel was tapped, the app would allegedly display the following:

“I am rich
I deserv [sic] it
I am good,
healthy & successful”

Perhaps the most puzzling aspect of the app, was that it not only received a barrage of scathing and admonishing reviews, but even despite that, at a whopping $999 to download, the developer was still able to sell the title to eight users. Amazingly, only two of which actually asked the company to reverse the sale, realizing it was probably the most ill-informed purchase of their lives.

Giving It Another Go?

Despite Apple removing ‘I am Rich’ from its App Store ten-years ago today, and Heinrich himself reportedly being inundated with hate messages — “many of them insulting” — the dev still managed to emerge from the woodwork a few years later with an updated title dubbed I am Rich LE. Costing a more reasonable $9.99, the app features a basic calculator in addition to a spell-checked version of the original I am Rich mantra above.

Unfortunately for Heinrich, the more affordable variant of I am Rich was still a bit too pricey for most users, and it largely failed to achieve the same publicity as the original. It still got some pretty decent reviews on the App Store, but has not been updated in over two-years.