With a tremendous amount of fanfare, Apple’s iPhone — the first-of-its-kind, one-stop device for all our communication, web browsing, mapping, and digital media needs — was released on June 29th, 2007. By 2010, the iPhone had become so successful, that Jobs’ goals shifted just ever so slightly. Not only did he want to introduce a new, truly mobile computing experience, but he also wanted to create a way for users to build, refine, preserve, and take their entire collection of digital media with them everywhere the road of life may take them.

Yet it was the latter of those two visions was brought to life as Apple’s iCloud service on October 12, 2011. iCloud is an intuitive mobile service from Apple, which allows users to store up to 1 terabyte (1,000 gigabytes) of digital media way up in “the clouds.” As the adoption of Apple’s iPhone and iPad began to skyrocket, so too did the amount of content being stored on those devices and in the cloud. As of February 2016, Apple’s iCloud was a second home for the digital content of over 780 million users around the globe.

“So what does that really mean?” you might ask. “And how can I protect all of my own content and data from being lost or accidentally deleted somewhere along the line?”

I’ve seen this happen far, far too many times before — a user makes a mistake, or doesn’t fully understand what an “iCloud backup” actually is, or the difference between iCloud and iTunes, for example. And as a result, data gets lost in translation from one iPhone or iPad to another, and, well — anyone who’s ever been adversely affected will almost certainly tell you how frustrating it can be to lose it.

Fortunately, for those with vast content libraries and swaths of digital data to their names, there does exist a one-stop solution for all your iPhone, iPad, and iPod Touch data recovery needs — and it’s actually a really cool, easy-to-use suite of tools that could change the way you go about backing up your digital data from here on out.

As any avid iOS user will tell you, it’s actually pretty easy to lose data on your iPhone or iPad. Even something so insignificant — like, say, for instance, swiping your finger in the wrong direction — can ultimately result in something of inherent value that’s now lost forever.

It’s a truly heartbreaking experience, for some; but the good news is that the permanent loss of data is preventable. And thankfully, Dr. Fone offers up a user-friendly means by which you can back up (mostly) all of the digital content that matters to you. Not just a few things as is the case, unfortunately, with iCloud. iCloud, for instance, doesn’t let users back up any content or app-specific information that wasn’t originally downloaded from the iTunes or Apple App Store.

Sure, you could always just do a USB-tethered iTunes back up, too — thereby saving even larger files, and, not to mention, more types of them. But, on the other hand, those “larger” files might not represent the majority of what you have tucked away on your iOS device.

And that’s exactly where Dr. Fone comes in. A wonderful and intuitive utility for both Mac and Windows users, Dr. Fone will work in conjunction with Apple’s entire line of iOS devices, from any generation. In other words, whether you’re using the first iPhone or iPad ever made, or the latest devices off the assembly line, Dr. Fone just works.

The program takes the guess work out of recovering iOS data, and it does so by allowing you to back up said data by either of two ways — from the physical iOS device, itself; or, in the event that your iPhone or iPad was lost, stolen, or badly damaged, via a hard iTunes backup.

To get started, you’ll want to download (or try out) the official Dr. Fone app on your respective desktop operating system, as well as the Recover app from Apple’s App Store on your iOS device. Once downloaded, the second step would be to connect your iOS device to your Mac or PC via USB. Dr. Fone utilizes what’s known as your iPhone’s Device Firmware Update (DFU) mode to prevent any additional OS data from being lost during the recovery process. 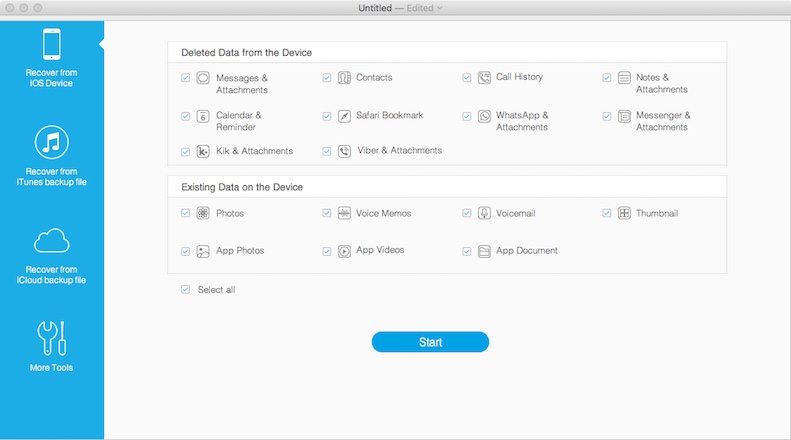 Upon connection, you’ll want to launch Dr. Fone and simply click the ‘Scan’ button — which will initiate the data analysis/recovery process. It’s a very speedy, seamless experience, although it may take a few moments for your iPhone’s data to be analyzed. You’ll notice a blue fill line on the screen, which indicates that Dr. Fone is doing its magic behind the scenes — as it scans your device for any deleted files or content that you may want to bring back from the dead.

Fortunately, Dr. Fone scans for essentially any deleted files on your device — regardless of the app from which the data originated. The software can recover items deleted from the camera roll, photo stream, photo library, contacts, text/picture messages and attachments, call history, calendars, notes, reminders, voice memos, and even Safari bookmarks, among other things.

In essence, Dr. Fone automatically scans for all types of files and, once the utility is complete, you’ll be able to see just how many files from each category Dr. Fone was able to recover. Using a brand new iPad Pro, I didn’t have much data to begin with — mainly just a few photos on my iPad’s Camera Roll, a handful of iMessage chats, apps, and Safari bookmarks. However, even from those few categories, Dr. Fone was still able to recover the few photos and Safari Bookmarks that I’d intentionally deleted for the sake of this review. The utility was also able to recover the few default Safari bookmarks that I’d intentionally deleted when setting up the device. 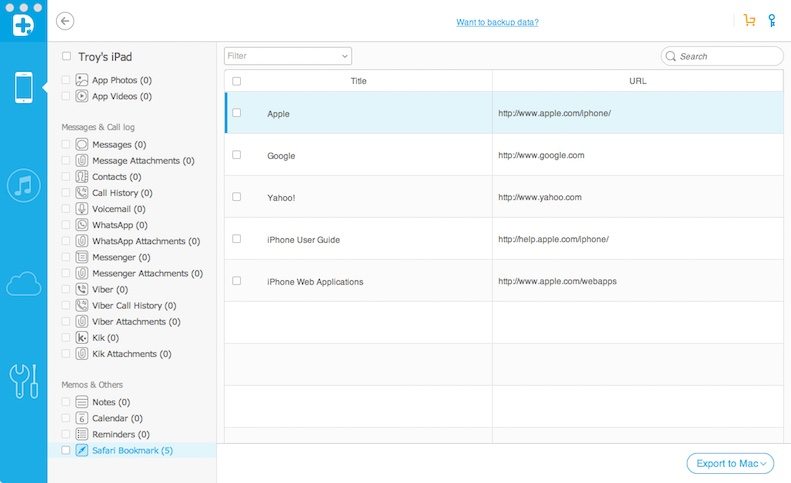 To achieve the best experience using Dr. Fone, it’s important to understand how the service works. If the user realizes that he or she has lost any form of data, the user should stop using the iPhone immediately so that the iPhone’s short-term memory isn’t overwrriten. The logic of recovering deleted data is like this.. The “lost” or “deleted” data is stored invisibly and unreadable to the user. But the memory that the “lost data” occupies is actually identifiable and usable to Dr. Fone. Therefore, if there is no new data generated on the iPhone, the memory will not be overwritten, and the data can then be recovered. However, if new data is continuously created, “lost data” will be written over (at random) and gone forever.

Unfortunately, as tends to be the case with pretty much all data recovery programs (including iTunes and iCloud), when you’re able to recover your contacts, occasionally the phone numbers and actual contact information will be missing. In other words, just a name, and perhaps the contact’s Facebook/Twitter photo, is present while their phone number was simply lost in translation. It is important to use any data recovery service immediately after losing precious data for the best chance of getting all of your lost data back. This is not a limitation of the service, but rather a limitation based on the technology within the iPhone; and Dr. Fone gives you the best chance possible to recover those lost files.

In any event, once all the other deleted files on your device are located and categorized, Dr. Fone will allow you to choose what you want to recover, and then walk you through the process, step by step, of either saving those files to your Mac or PC, or restoring them to a current or future iOS device.

It’s really as simple as that! And an added bonus is that Dr. Fone offers users a robust suite of tools to help retrieve lost data — such as conversations, photos, and other content — from various social networking service (SNS) apps. For heavy users of SNS apps, such as KiK, Viber, and What’sApp, Dr. Fone enables you to restore valuable content from those apps to a new or existing iOS device that you’re simply trying to restore from a saved backup. 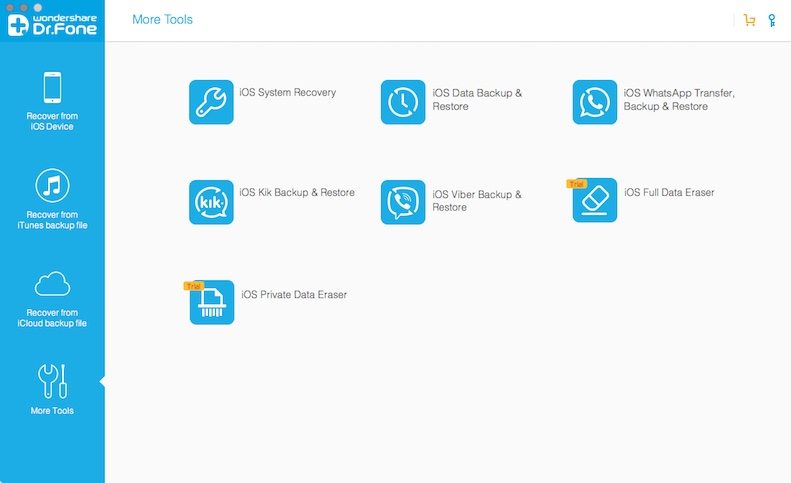 Alternatively, Dr. Fone can be used as a tool for recovering, or even erasing, entire iOS devices and their content. These additional tools would come in quite handy for users who are planning to either sell or give their iOS device to another user and want to completely wipe their device of all data, content, and settings. Or, in the case of restoration, those who pick up a new iOS device and want to back it up with all their original content.

Is Dr. Fone perfect? No, it’s not.. But in an imperfect world, where things can go awry, and even the most important, highly guarded digital content can just — poof! — disappear in the blink of an eye, Dr. Fone by Wondershare is a fantastic, feature-rich utility that any avid iOS user should consider investing in. If you care about the digital content stored on your device — which you likely spent months or even years accumulating, then Dr. Fone is an impressive utility that can help you keep it all safe and sound for months and years to come. 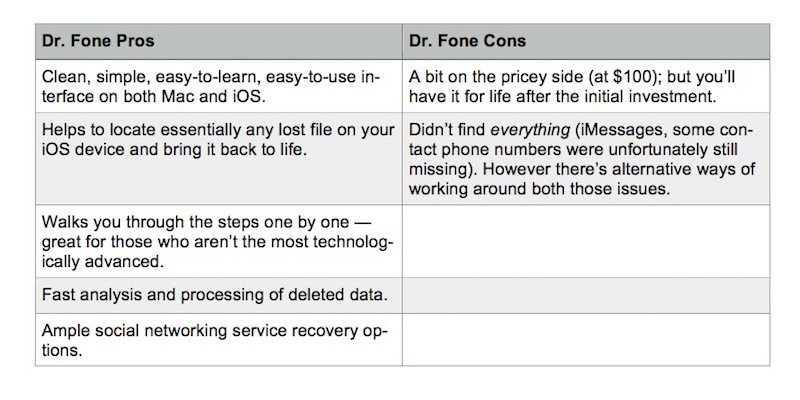