The Dalai Lama is coming to iPhone. The Buddhist monk and exiled Tibetan spiritual leader has launched his own free app on the iOS App Store.

The app, simply dubbed Dalai Lama, will allow users to stay up to date with the 82-year-old Buddhist monk, as well as view photos and watch live video streams of his events. The app will also feature more general information about the Dalai Lama and his life. Event schedules, travel plans, and the Dalai Lama’s teachings will also be available on the iOS app.

The Dalai Lama app is currently only available for iOS. There’s no word whether or when an Android version will be released.

As of the writing of this article, the app has a total of 33 reviews and a 5-star rating on Apple’s App Store. “It brings me joy, helps me to improve my perspective on life, and provides an amazingly convenient social connection to the Dalai Lama,” wrote one reviewer.

This is not the Dalai Lama’s first foray into the world of technology, however. The Buddhist monk maintains a Twitter account with a following 16.6 million strong. In fact, the Dalai Lama first announced the launch of the new app in a tweet on Dec. 14. 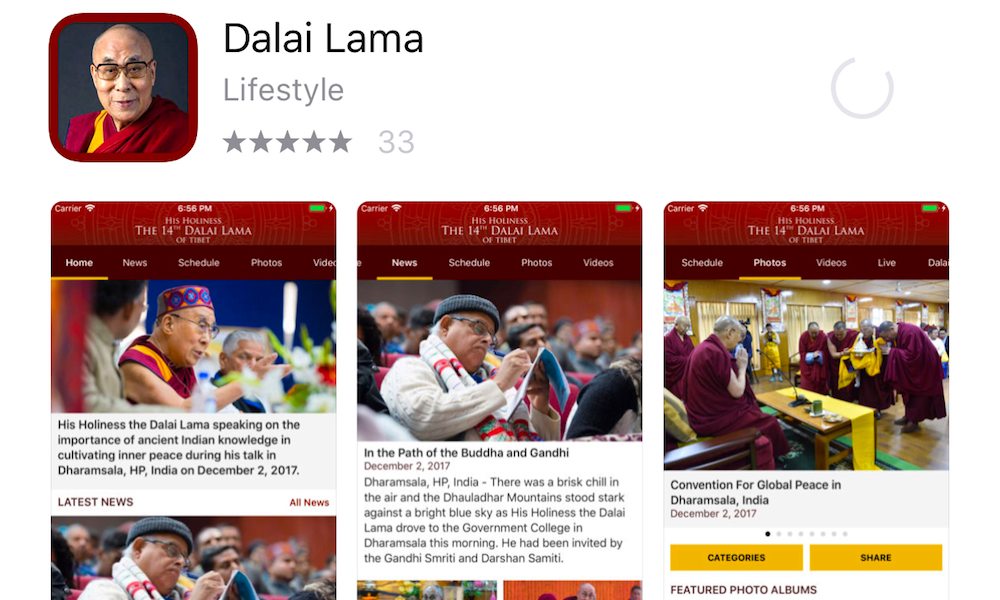 But despite his tech-forward stance, the Dalai Lama still cautions people not to let technology dictate their lives. “Without technology, humanity has no future, but we have to be careful that we don’t become so mechanized that we lose our human feelings,” he said in a 2014 interview. It is not currently known where he uses a smartphone himself (or whether that smartphone is an iPhone).

While the new app is free to download across the globe, it is currently not available in China’s App Store. As a result, many Tibetans will not have access to the app. According to AFP, Apple has blocked iPhone apps related to the Dalai Lama and other Tibetan exiles from its Chinese App Store in the past.