When most of us think of endoscopic cameras, we picture those long, dangly devices doctors use to peek inside of their patients. As it turns out, these cameras are good for more than just probing around the human body—and you don’t need a medical degree to use one.

Consider all the times you needed to fish something out from behind the fridge or unclog a stuck drain. Sure, you might have some success with a flashlight and a creatively bent clothes hanger, but if you want to get the job done, you have to go to where your work is. And, short of shrinking yourself down to molecular size, nothing can match the precision and clarity offered by an endoscopic camera.

This is where Neva Tech’s Endoscopic Camera comes into play. Priced at $39.99, this camera aims to give users an unbeatable vantage point in tight spaces and even works in wet environments, like drains and pipes, projecting its feed directly to a smartphone or laptop wirelessly.

We’re reviewing the three-meter, 720p variant today, but before we get too far, let’s start with first impressions: 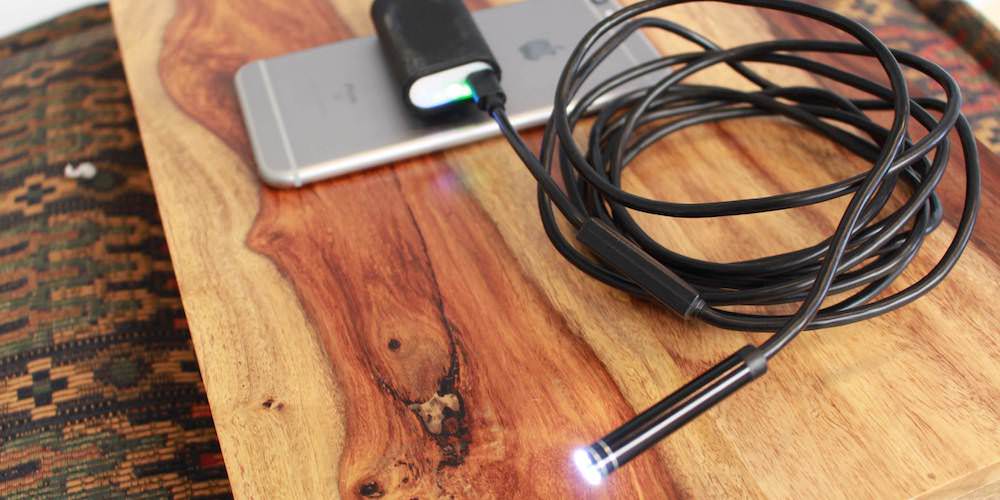 As it turns out, Neva Tech’s Endoscopic Camera comes with a bit more than just the camera. Here’s a list of what is inside the box:

First and foremost, right out of the box, the cord measures in at a generous three meters (or nine feet), giving the user plenty of endoscope to work with when reaching into tight spaces (more on that later). What’s more, the endoscope itself feels firm yet flexible, which is important since an endoscope needs to be strong enough to maintain its shape while still being able to snake around tight spaces, like engine bays and drains.

At one end, the user will find the 2.0-megapixel camera, which is surrounded by eight adjustable LED lights and records in 640×480 and 1280×720 resolutions. According to the manual, the camera head’s diameter measures in at 8mm, which is more than narrow enough to fit inside most drains, grills, and vents. Its focal distance is best at 4-6 cm.

At the other end, the user find a micro-USB plug as well as a brightness control wheel for the lights at the opposite end. The endoscope also boasts an IP67 waterproof rating, so the user can safely use it to peek inside wet places, like drains, pipes, and so on.

Next is the Wi-Fi unit, which doubles as a power source and enables the camera to connect to your iPhone. It’s roughly the size of two AA batteries and includes a suction cup sleeve to attach it to your device. The manual says its rated at 750 mAh and lasts about 110 minutes, though operating time is shorter if you use the LEDs. The unit runs on a 2.425GHz-2.493GHz frequency, and its transmission distance is rated for 5 to 30 meters, though the extra length is somewhat superfluous since you’ll likely be using your iPhone next to the endoscope.

At one end of the unit, you’ll find a micro-USB charging input to power it up and an indicator light. The manual notes that the unit typically takes two hours to fully charge. On the opposite side, you have a micro-USB input for the endoscope, a light, power button, and LED indicators for power and Wi-Fi.

As an alternative, the camera also includes a micro-USB adapter, allowing the endoscope to connect directly with your computer, and allowing you to see the camera’s feed on your computer screen via an app that’s downloaded separately.

The endoscope comes with several attachments that can be fixed directly to the camera with a collar. Inside, you’ll find a hook, side-view mirror, and magnet to enhance the endoscope’s capabilities. The attachments are metal and fit securely enough to use with the device while poking around tight spaces.

Finally, the package includes a user manual which identifies the hardware and directs you through the setup process: 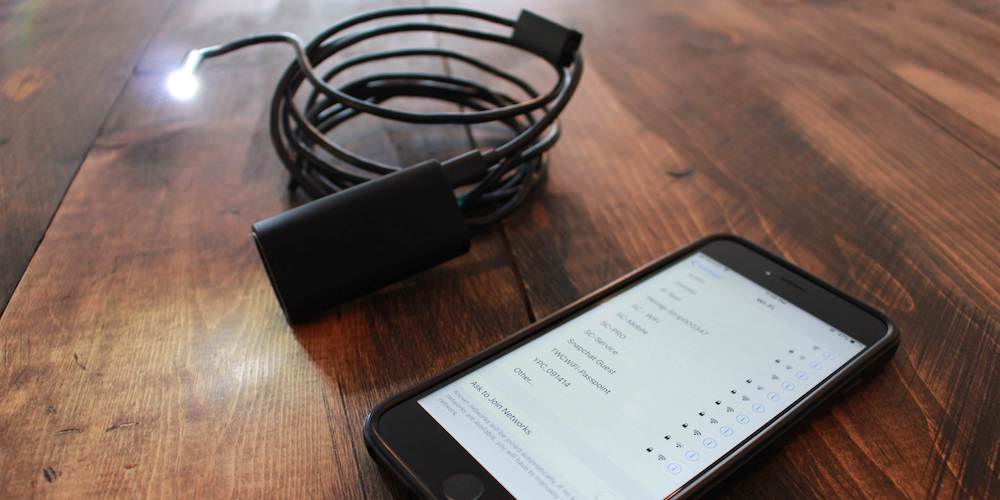 Setting up the endoscope is fairly intuitive and pain-free with the manual. Depending on your preference, you can use the endoscope on your Mac or other iOS devices (iPhone, iPad, iPod). For iPhone users, the manual prompts you to install an app, which is available in the App Store, and it even provides a QR code for you to find and download it faster.

From there, you plug the camera’s micro-USB plug into the Wi-Fi unit (once it’s charged) and press the power button once. The unit will then illuminate a green light, indicating it’s now generating a Wi-Fi connection. Finally, simply select the Wi-Fi network labeled on the manual, enter the password, and then you’re ready to use the app.

For those interested in using the camera with their computer, you simply need to plug the camera into your Mac via the included micro to USB adapter. Mac users can view their camera’s feed with Photo Booth, QuickTime Player, and VLC (Video LAN Client). 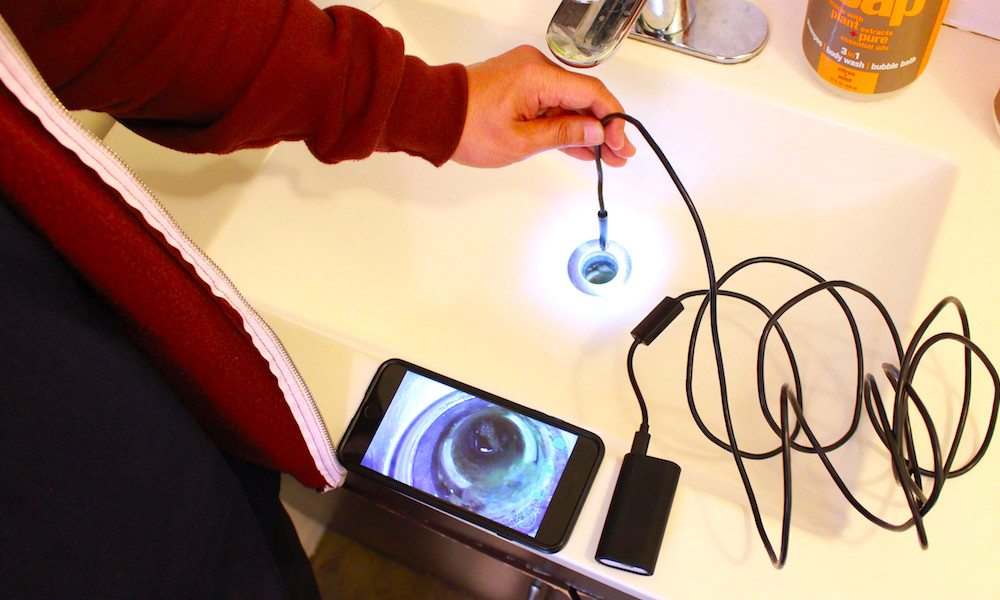 After setting up the device and installing the app on an iPhone, this review used the endoscope to peek into a few areas in and around a house, starting with a bathroom sink. As mentioned earlier, the endoscope is surprisingly rigid, allowing it to maintain its shape as it snaked down the drain.

Working through a bathroom sink’s plumbing, the device beamed its feed straight to my smartphone with crisp definition. A 640×480 resolution might not sound that impressive on paper, but on a smartphone screen, the image was clear enough to grossly identify accumulated grime and curious clumps of hair in impressive detail with the aid of the eight LED lights.

As one would imagine, the LEDs were sufficiently bright. Though, it isn’t recommend pushing them to their full brightness in tight spaces, like drains and pipes, as much of the image is usually washed out by the output. Fortunately, the dial on the opposite end of the endoscope allows you modify the LED’s brightness like a small dimmer switch. Ideally, users should kept the LEDs at about 75 percent.

The Wi-Fi unit’s connection was strong enough to beam an uninterrupted feed to the iPhone with a delay that seemed to last only a fraction of a second if at all. This delay remained consistent throughout the entire test run.

Focal distance is vital when operating the camera, and, per the manual and my testing, keeping the device a solid 4-6 cm away from your subject is ideal. Note: this calls for some care on the user’s end, as the end of the endoscope was accidentally bumped against the lining of bathroom drain pipe several times, covering it in sticky (and disgusting) residue, which obscured the screen and had to be cleaned off before proceeding. Thankfully, this is where the device’s IP67 waterproof rating comes into play. Upon being rinsed off and subsequently fed into multiple wet drains, the device never once failed.

Users can increase the camera’s resolution to 1280×720 via the app, which produced an even sharper (and grosser) image at the cost of some framerate of the drain. The drop in framerate is noticeable but to be expected with a $30 camera and a free mobile app.

A few points about the endoscope camera app: the app opens with a direct feed from the camera, and next to the feed are four buttons that affect the device’s functionality. The first button allows you to switch between resolution modes, so you can quickly alternate to a sharper or faster image. Next is the library, which stores photos and videos taken by the camera with the next two buttons: video and photo.

All in all, the endoscopic camera was fed roughly two of the endoscope’s three meters down the drain, as operating it becomes increasingly more challenging as you feed more of it into a tight area. However, some of this difficulty can be avoided if users curl some of the endoscope length into a makeshift handle, allowing the user to maneuver the camera end of the endoscope by twisting the extra cordage in the same direction.

In addition to the bathroom sink, this review used the endoscope in a few other tight spaces, including behind a tight couch, under a washing machine, and inside a few air vents before moving on to the attachments. 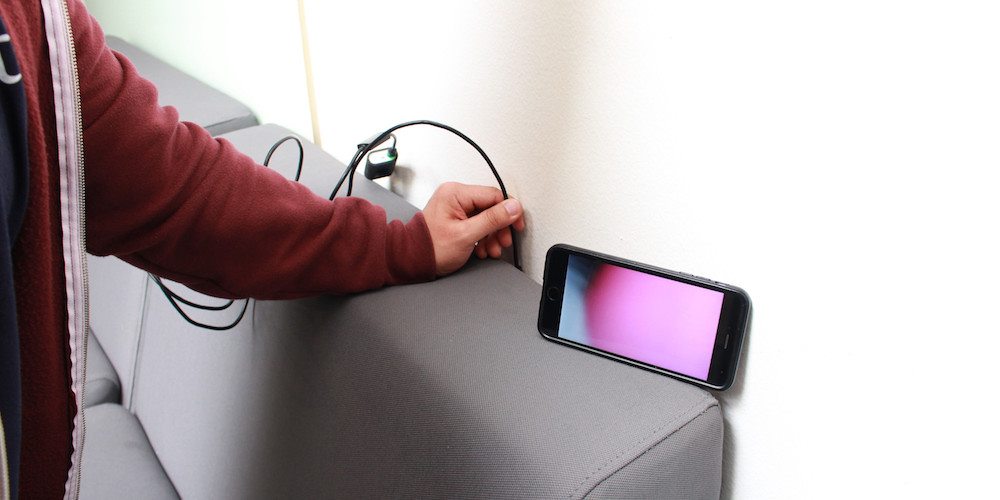 As stated before, the endoscope includes three additional attachments: a hook, side mirror, and magnetic rod. These are each fixed to the camera end via a small collar, which unlike the attachments, is fashioned from plastic instead of metal. Despite the collar’s construction, it was able to securely hold each attachment throughout my tests, though it is worth noting the collar slightly increases the endoscope’s diameter.

First, the magnetic rod was quite powerful despite its compact size. Curious about the device’s pulling power? Well the attachment successfully retrieved batteries, fobs, and keys from the floor. The heaviest of these weighed in at about 3.5 ounces, which was no problem for the rod provided enough surface area was present.

Next, the hook was capable of retrieving common objects, like rings and keys from beneath the fridge. Maneuvering with the hook takes some finesse, but having tested the device for some time up to this point, doing so was still very much possible.

Lastly, the side-view mirror use cases are somewhat niche, as it essentially allows the camera to see at a 90-degree angle. In this sense, the endoscope and mirror worked together as an excellent vanguard, peeking around tight corners and areas where you’d rather not be exposed, such as a crawl space that might be home to rats or other scary critters. Through testing, the mirror did exactly what it was supposed to do, but, like the rest of the attachments, takes some time to get the hang of. 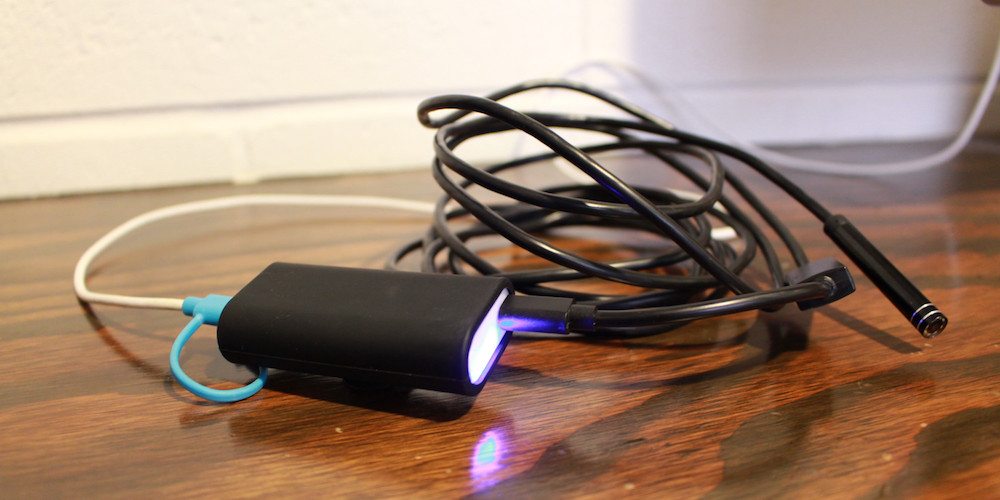 The endoscope and its attachments were tested for a little over an hour before the Wi-Fi unit’s battery died. Although the manual rates the battery to last up to 110 minutes on a single charge, this operational time is diminished if the user uses the LEDs (used during the entire testing experience). This shouldn’t come as much of a surprise, though. After all, using a flashlight on any device kills the battery faster than just about any other function.

For its price point, Neva Tech’s Wi-Fi Endoscopic Camera achieves far beyond its expectations. Coming in at a meager $39.99, the endoscope lets you look around tight spaces, inspect drains and vents, and even retrieve valuables for a fraction of what a surgical endoscope would run you. It’s not going to record your drain’s interior in 4K (is that something you really want to see?) but its resolution is sharp enough to let you diagnose blockages and locate lost trinkets with the aid of its attachments and generous three-meter length.

The Wi-Fi unit’s battery life could always be better, but judicious use of the LEDs and smart time management can help you get the most out of your two-hour limit. Plus, given the device’s $39.99 price tag, a short battery life is far from the last nail in the endoscope’s coffin.

All in all, if you find yourself frequently dealing with clogged drains or jewelry and keys kicked underneath heavy appliances, Neva Tech’s Wi-Fi Endoscope will be a godsend that pays off dividends for next to nothing. The camera is available here for $39.99, which is 20% off its normal $49.99 retail price.

“Neva Tech’s Wi-Fi Endoscope will be a godsend that pays off dividends for next to nothing.”

Read Next: AirPods vs. Xiaomi AirDots – 5 Things You Need to Know