It was recently reported that Apple’s forthcoming ‘iPhone 7’ and ‘iPhone 7 Plus’ would be far too thin to support the inclusion of the industry standard, 3.5mm headphone jack. And while the rumor mill is still suggesting that there will, indeed, be no headphone jack built-into Cupertino’s forthcoming flagship, a recently leaked set of iPhone 7 schematics all but confirm that there will be absolutely no difference between the forthcoming device and Apple’s current generation iPhone 6s/6s Plus — at least, insofar as physical dimensions are pertinent.

The latest set of leaked images, which are coming to us this afternoon courtesy of Letem Svetem Applem, were supposedly provided by what the publication is calling “a reliable source with deep ties to Apple’s supply chain.”

As a matter of fact, the 4.7-inch ‘iPhone 7’, according to the images, is actually slated to clock in at 7.2mm — which is just a little bit thicker than the current generation iPhone 6s, which clocks in at 7.1mm. As for the ‘iPhone 7 Plus’, these schematics — if indeed they are accurate — show us that the plus-sized, 5.5-inch iPhone will retain the same 7.3mm thickness as its soon-to-be predecessor, the iPhone 6s Plus. 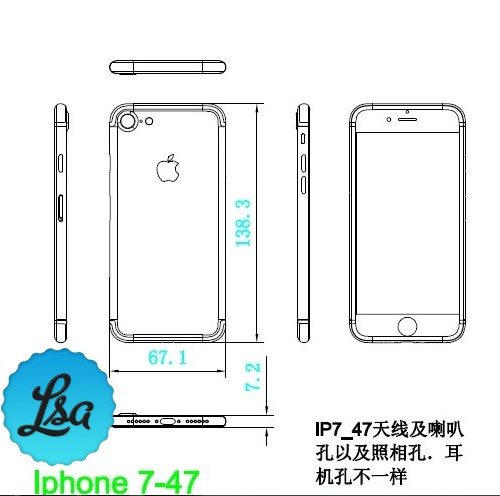 As can be seen, neither handset appears to feature the 3.5mm headphone jack, however, what isn’t clear from the images is what Apple did with the space that was previously occupied by it. Rumors suggest that the Silicon Valley iPhone-maker could be replacing the current speaker system with a more advanced, quad-speaker set up — similar to that of Apple’s iPad Pro line. Although, for what it’s worth, I think most of us were just expecting a thinner iPhone, right? I suppose we’ll just have to see what happens there, and of course, it wont be long until we find out!

Will you still be lining up for the company’s iPhone 7 that’s due out this fall? Let us know in the comments!