A recently discovered type of iOS phishing scam is adopting some interesting new tactics — and you should be on the watch for them.

The phishing attack was first reported by Ars Technica’s Sean Gallagher. At first glance, it might appear similar to previous Apple-related scams: it uses a phishing email to push users to a fraudulent Apple website.

That website informs potential victims that they device has been “locked due to detected illegal activity.” It also instructs them to call a fake support number to get their account and device “unlocked.”

But the scam also displays a system dialog box with the fraudulent phone number. It’s the exact same “call or cancel” box that pops up when you legitimately tap on a phone number in iOS. 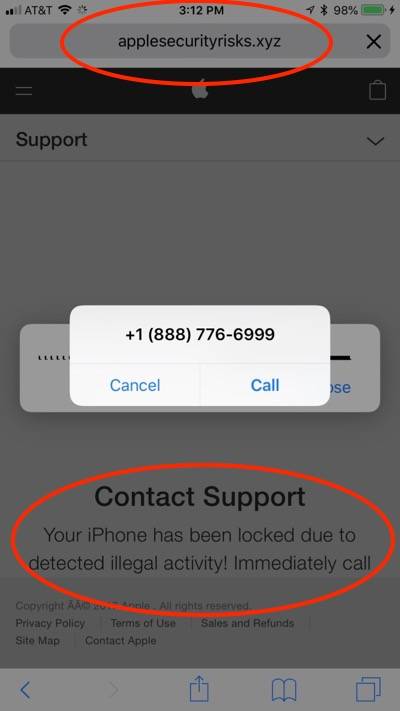 Gallagher actually called the number while reporting on the scam to get more information about it. Apparently, he was connected to someone who identified themselves as “Lance Roger from Apple Care.” Lance Roger reportedly got suspicious and hung up.

In addition, Ars Technica noted that the scam appears to be related to another malicious attack that uses compromised mobile device management services to push malware onto a user’s device.

How It Works
How to Protect Yourself

Jeremy Richards, a threat intelligence researcher at Lookout, told Ars Technica that mobile phishing attacks are more likely to succeed because users tend to be distracted or inherently trusting of their smartphones.

Also, take note of the small details. An attacker might claim to be from “Apple care” — which is a nonexistent entity.

AppleCare is a warranty service, while support technicians are part of Apple Support. Those types of small inaccuracies can give a scam away if you pay attention.

Again, if in doubt, don’t tap on anything. If you’re concerned about your account security, your best bet is to contact Apple directly from a legitimate URL — like Apple.com or iCloud.com.

Browse Internet and Home Security Tools
Read Next: Future MacBooks Look More Likely to Use Your iPhone as a Touchscreen
Sponsored