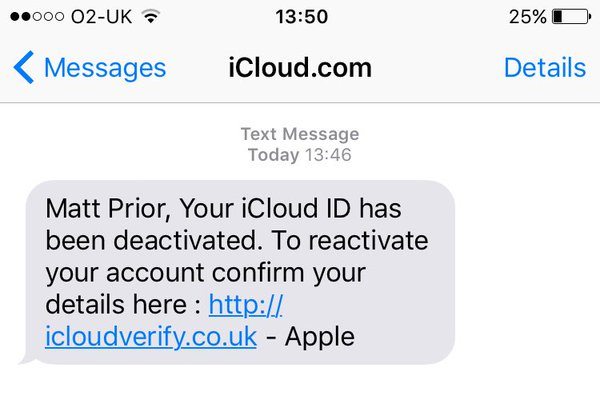 With the rise of the smartphone, scams delivered via iMessage or SMS text are becoming increasingly common. In our digital era, you’re just as likely to receive a scam through text as you are through an email.

As with previous scams on the list, text scams can vary in form. They’ll say that your Apple ID has been locked due to a recent string of attempted logins, or something similar. They can also claim that your Apple ID will soon be terminated, or that your iCloud account has been closed for some reason (which, at times, isn’t given).

Most scam text messages will promise dangerous consequences if you don’t comply (though, of course, the exact opposite is true), and will include a link to a fraudulent site where you’ll input information. Some scams even incorporate other random text messages in a foreign language to give their claims of a “breached account” extra credibility.

As with other scams on this list, your best bet to deal with unsolicited contact is simply to delete the message. If they mention texting them back to stop further texts, don’t. Doing so will tip the scammers off that they have an active, real phone number to harass in the future.

Next Up 7 Or use arrows to navigate
Share
Jump To:
Social Sharing