Microsoft announced several new devices on Wednesday, including a new desktop PC with an innovative twist, and a refresh of its Surface Book lineup.

The Surface Studio is Microsoft’s first all-in-one desktop, and it’s pretty obviously aimed at creatives and other professionals. Vaguely reminiscent of an iMac, it features a 28-inch touchscreen display that packs in over 13.5 million pixels. Its True Color display is comparable to Apple’s Wide Color technology, in that they both use the DCI-P3 color space. But most notably, the entire Surface Studio can tilt down vertically to a 20-degree angle, for use as a drawing surface.

Internally, the desktop features a quad-core Intel processor, 32 gigabytes of memory, an Nvidia 980M graphics processor and a 2TB hard drive — although the Surface Studio will come in different RAM and processor configurations at cheaper prices. It also has Xbox wireless protocol implementation, so you can use game controllers. As far as ports go, the base of the computer has an SD card reader, four USB 3.0 ports, and a place to plug in a Gigabit Ethernet cable. It also features 2.1-channel surround sound speakers. 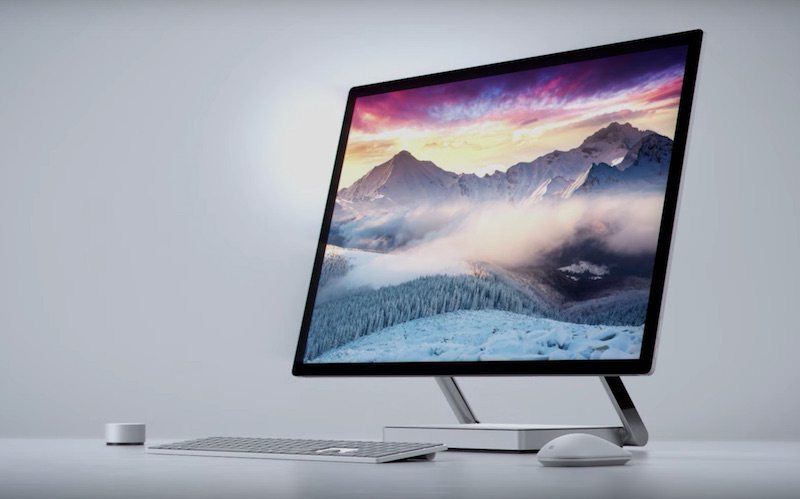 The Surface Studio’s peripherals include a wireless mouse and keyboard, as well as a new accessory Microsoft is calling a Surface Dial. It’s a $100 haptic feedback controller that provides the user with fine contextual control capabilities. It can also be placed directly onto the display to be used as a rotating selector dial. The Surface Studio also compatible with Microsoft’s new Surface Pen, allowing for drawing directly on the screen.

Despite its touchscreen capabilities, it’s not too much of a stretch to compare the Surface Studio to an iMac. They’re both all-in-one computers with similar internals and displays, but it’s arguable that the Surface Studio has some increased capability because of its tilt and touchscreen ability. Of course, you’re going to be paying quite a bit more for the high-end version of Microsoft’s new PC than you would for a comparable iMac.

The all-in-one desktop is currently available to preorder. It’ll retail for $2,999 for a Surface Studio equipped with an i5 Processor and 8GB of memory. The high-end configuration with a quad-core i7 processor and 32GB of memory — which was the one demoed at Microsoft’s event — will retail at $4,199.

It’ll only be available in “limited quantities” before the end of 2016, the company said.

Microsoft also announced its new Surface Book i7 at the event. The Surface Book refresh focuses almost completely on processing power, and Microsoft said that it doubles the graphics performance of older Surface Book models. It’ll be equipped with a Core i7 processor, and updated cooling systems. The i7 boasts 16 hours of battery life whilst in laptop mode.

At the event, Microsoft was quick to mention that the i7 was “three times” faster than the 13-inch, 2015 MacBook Pro. Though, it’s worth noting that the company did not pit it against the 2015, 15-inch MacBook Pro, which is probably a fairer comparison, both in price and performance.

Most specs and technical details for the Surface Book i7 are currently unknown, but pre-orders are starting now. It’ll be available in November and will retail for $2,399.