The U.S. Patent and Trademark Office has recently published a number of filings related to Apple’s self-driving car initiatives — and they reveal some interesting developments. These recently published patents (which were all filed for in September 2017) might hint at Apple’s future plans for autonomous vehicles, or even the systems that its currently testing on the road.

Apple has long been rumored to be working on a secretive car initiative dubbed “Project Titan.” Though, in recent years, Apple seems to have shifted its focus from actually making an Apple car to developing the underlying systems and mechanisms that power self-driving vehicles.

The company’s car project is less secret now and the firm is now actually testing autonomous vehicles on California roads. And just this week, the Financial Times reported that Apple’s fleet of self-driving cars is now bigger than its chief rivals in the area, including Waymo and Uber. To see the tech that Apple could be testing with those vehicles, go to the next slide.

4 Interaction with Other Vehicles 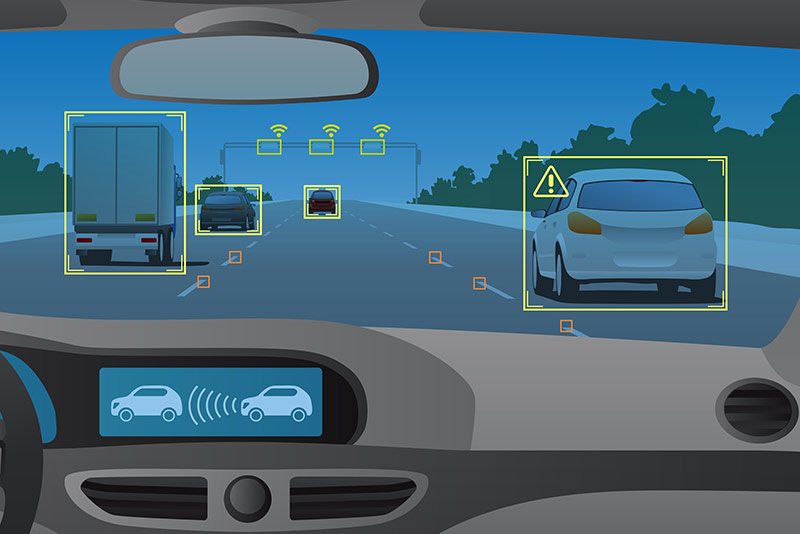 Apple’s “Vehicle Control System” patent pretty much outlines how a self-driving car could interact with other vehicles on the road. Basically, it’s the “systems and methods” that allow for automated vehicle lane change maneuvers. But, of course, it implements fairly complex methods of detection and prediction in order to make safe lane changes.

The system relies on a suite of sensors to determine the location and motion of nearby vehicles. It then uses that data to make a safe lane change, predicting the potential moves of other vehicles. Before performing any lane change action, the system determines how “feasible” that maneuver actually is, based on the other cars on the road.

“Traffic direction gesture recognition” has little to do with which way traffic is headed. Instead, the patent details a way for a self-driving car to detect and follow the gesture of a person giving traffic orders on a road (such as a police officer manually directing traffic).

This, of course, would be incredibly useful in the event of a street light or traffic signal failure. But the patent brings up other applications, too. For example, the system could detect a pedestrian in the road attempting to stop traffic in case of an accident or severely congested roads. It could then transmit that person’s gesture commands to other nearby self-driving cars, allowing them to react accordingly.

It’s not just traffic cop directions that Apple is taking into account. Another patent, “Gesture based control of autonomous vehicles,” describes a system for passengers of a self-driving car to give instructions or otherwise control that car via voice, gaze or hand gestures.

For example, a car’s screen would display several options that a rider might want the car to take — including where to park, changing speed, or selecting a new route to take. But it’s the gesture controls that are interesting. Apple details an “interaction zone” that would activate when a hand enters it. Users could then control the car with specific hand and finger movements or poses.

“Cognitive Load Routing Metric for Vehicle Guidance” is, in the simplest terms possible, a method for finding the best route to a destination. But the system goes far beyond finding the quickest way via Google Maps — it factors in a range of other parameters.

Basically, the system can use infrastructure information to determine the best route based on how difficult to drive it may be. It can take into account the number of lanes and narrowness of a road, as well as how many traffic signals or street lights there are. It combines those factors with weather and real-time vehicular and pedestrian traffic data to find the best route.